Episode 4, Floor 9 is the final level of Wolfenstein 3D episode "A Dark Secret". It is a boss battle with Otto Giftmacher

In you starting room there are two doors that will lead to the same room; this new one contains two doors too. The one to your left will lead you to the boss room. In that room are a gold door and a silver door which will give you access, respectively, to lots of health items and to lots of ammo clips. In order to obtain the keys you have to open the other door. In this room is a single guard with his back turned towards you which is protecting both the keys. Really? You just have to kill ONE GUARD to grab the keys? Shoot him and watch what happens: it's a trap! Three doors on the left of the guard will open and a HUGE ambush of officers (and SS if you're playing on "Bring 'em on!" or "I am Death incarnate!" difficulties) will come out of the room beyond. Find cover behind a wall or a door and destroy everyone. Enter the room that the enemies came from and grab the cross which is inside. Now you can face Otto Giftmacher in his room. You can also kill the single guard without alerting other. Lure the single guard to the room where you began the game and then stab him to death. If shots aren't fired, other guards will not hear you and you'll be able to get the keys.

The boss of Episode 4 hides behind one of the four wooden islands in his room. He wields a rocket launcher, but he is very easy to defeat: it's not that hard to dodge the rockets, and the boss hasn't got a lot of health. Therefore, if at the start of the level  you are in good conditions (in terms of health and ammo), it's not necessary to get the keys and enter the rooms with the ammo clips and the health: what you have at the start will be enough to defeat Otto.

The only secret of this final floor is in the room with the "single" guard: it contains two more keys. If you know where this secret is, you don't need to kill the guard and destroy the big ambush. 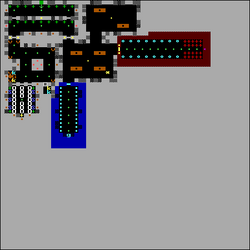 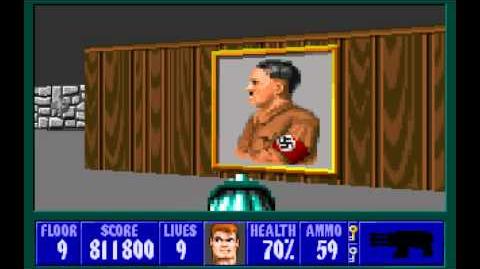