Episode Five of Wolfenstein 3D, titled Trail of the Madman, is the second in the Nocturnal Missions trilogy of episodes which was initially sold separately from the game's first three episodes, later fully integrated into the game.

The Nocturnal Missions depict B.J. Blazkowicz's struggle to end the German chemical warfare campaign. Having killed the scientist behind the chemical weapon manufacturing in the previous Episode, B.J. Blazkowicz now seeks to find the plans for the Giftkrieg (poison war), in the fortress of Erlangen. After fighting through nine (or ten) floors, he finds the plans - guarded by Gretel Grösse, who serves as the boss of Episode Five. 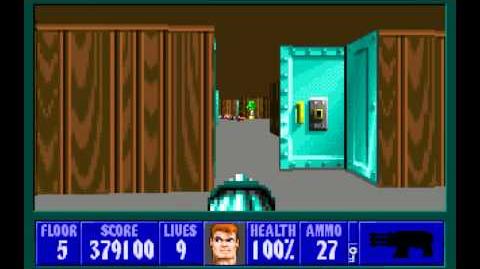