Episode 5, Floor 10 is the Secret level for Wolfenstein 3D episode "Trail of the Madman". The level is accessed from Floor 5 and exits to Floor 6.

The level is comprised of confusing, twisting hallways filled with Crosses at every turn and beginning at level 3 difficulty, guarded by Officers and SS. The player spawns in a bright red brick central hub guarded by SS. Each of the four rooms of this hub opens to two of four hallways:

The exit room itself holds treasure, Medkits, Ammo and a Chain Gun.

This level has no Secrets.

The level is convoluted and confusing, there are multiple routes to get around. A single shot fired anywhere in any of the twisting hallways will alarm all enemies within that hallway. As a result, it is very easy for unseen enemies to become alarmed then find a way to sneak up on you. An Officer's gun is deadly enough without a sneak attack, so keep moving constantly and run through any doors you see.

To have at least a Machine Gun is a lifesaver. If you don't have one, find an SS by going left immediately from the start and taking any of the three doors. Be aware that two others will come fight as soon as there is any combat.

The most optimal path to beat the level would to head straight forward from the start, turn right at the first larger room (to collect the key), and then turn right in the second room to clear the hallway before the locked door. The player can then make a slight detour to collect the Crosses from the shorter blue hallway and then proceed to exit the level.

Just remember to keep moving constantly and try not to get hit too many times, because there is no health until the final room of the map. 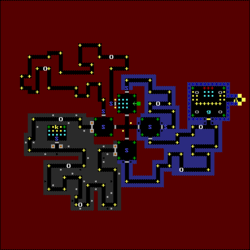 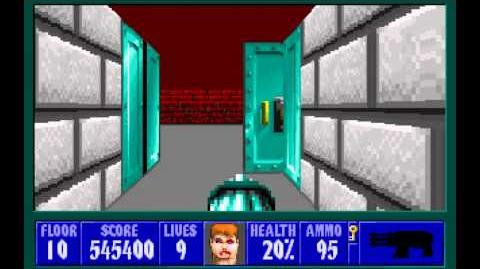