Episode 5, Floor 4 is a level of Wolfenstein 3D episode "Trail of the Madman". It is the only normal level in the game that is almost completely symmetrical - both horizontally and vertically.

Save for the secrets, the level is nearly perfectly symmetrical in design. A central room in which the player spawns opens to four hallways, eventually leading to four corner rooms, each of which has a Secret.

This level can be annoying, especially in a worst-case scenario (I am Death incarnate! difficulty and only a Pistol and 8 bullets). There are two reasons for this.

If you begin the level with no supplies, it is best to try to make it to the southeast room first. Not only does it have the gold key necessary to complete the level, it contains an ever-useful Chain Gun. Take the east door out of the first room to avoid the charging group of enemies seen in issue 2 above.

There are patterns repeated in this level:

1. Each red brick room has a secret on the eagle portrait. Health, ammo, and treasure is in each secret.

2. Each red brick room has two doors leading to corridors both connecting to (different) blue rooms.

3. In each blue room there are three doors. The doors towards the center of the level lead to hallways that connect to the starting room. The other two doors both lead to corridors connecting the red and blue rooms.

4. All four doors in the starting room lead to a hallways connecting to one of the blue rooms. 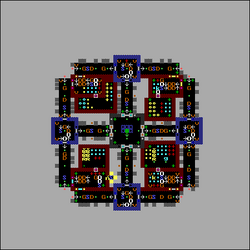 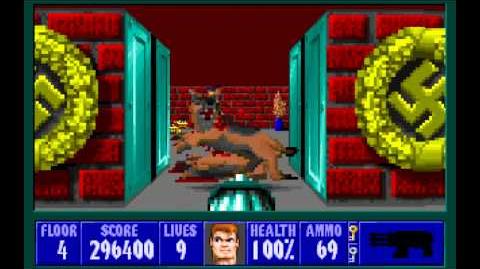