Episode 5, Floor 6 is a level of Wolfenstein 3D episode "Trail of the Madman".

The level appears either to be carved out of solid rock or to take place in a natural cave, as the outer walls form a very irregular shape and seem to be composed of jagged rock, the color of which matches that of the ceiling. A cluster of rooms built of stone exists in the center of this natural or artificial cavity.

To exit the level, one must find both silver and gold keys. These can both be found in the inner group of rooms, the gold key through a convoluted hallway, the silver through a door locked by the gold key. In the east, the elevator room itself is composed of red brick, and is heavily guarded by SS and Officers, including one Officer in the elevator (beginning at "Bring 'em on!" difficulty).

Two Secrets may be found in the outer wall of the level, both of which hold caches of treasure, ammo, and health supplies, as well as a Chain Gun in each. 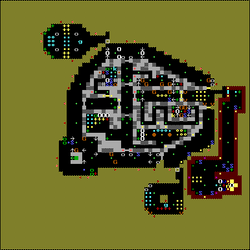 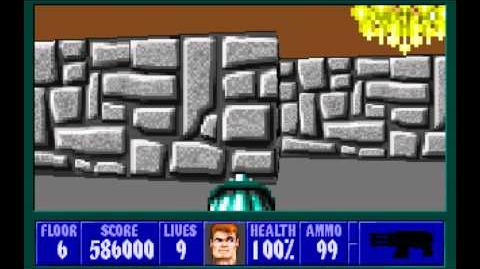