Episode 5, Floor 9 is the last level of Wolfenstein 3D episode "Trail of the Madman". It's the showdown with Gretel Grosse, which is the sister of the boss of Episode 1, Hans Grosse.

At the start, there is a door in front of you, one on your right and one on your left. You can open any you want, inside all of them are enemies. If you fire a shot in any of the four rooms in this starting area, all the enemies inside this area will be alerted (they're not many). In each one of the rooms with enemies are doors that take to the same place: the boss room. So you can open any of the doors, you'll come to a very large room with several islands in it.

Gretel Grosse and the end of Episode 5[]

Gretel hides in the bottom of the large room, behind a big island. She wields two particular chainguns. She can be quite easy to defeat because of the large number of cover spots in the room, but if you're not careful and/or you haven't got a chaingun, the encounter with her won't be a piece of cake. When she dies, she drops a gold key. Grab it and find the gold door. Behind it is a final ambush of officers and SS. Once you've destroyed the foes, enter the room: at the bottom of it are the plans for the Poison War!

There are two secrets in the boss room: on both right and left wall is a secret behind a Hitler's picture: the western secret has got lots of treasure, the eastern one more treasure and the chaingun: if you are starting this map from scratch (which can be quite hard), find this secret: it is very nice to have. 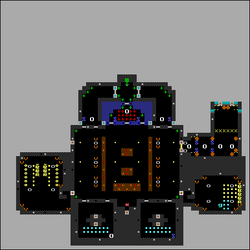 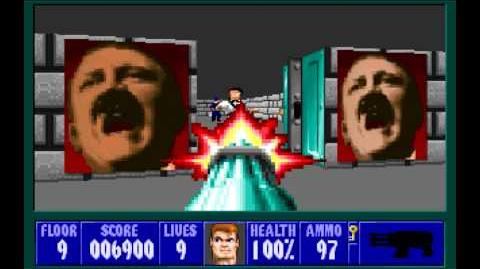