This level is notable for being VERY difficult (for an opening map), containing 137 enemies. However, it is not as hard if you know the strategy and take it at an appropriately slow pace. It opens up with 1 - 3 Officers behind columns, 1 of them being alerted immediately starting on the I Am Death Incarnate! difficulty. The level consists of practically four areas: the starting area, long blue-walled hallways with many Officers in alcoves, a rocky area where Guards, treasure and a Secret are located and a huge hallway filled with Guards and the occassional SS and Officer. There is a gold key in this level but it is only for a secret area. No keys are required to beat the level.

Duck into the alcove to the left to get two ammo clips before taking out the 1 - 3 Officers behind the columns. You can kill them now or later on (now recommended.) Go through the only accessible door and the door to the right. Firing / stepping into the room will alert 1 - 3 SS. Kill one or two and take the later one / two SS with a machine gun dropped by the enemy. There are several ammo clips and a First Aid in the SS' room.

Open up the next door, and you'll be faced with a blue hallway with MANY alcoves. On Can I Play, Daddy? this is practically no problem, as there are not many Officers in the entire alcove-hallway area. But on Bring 'Em On! and I Am Death Incarnate! difficulties, there are a LOT of Officers in most of the alcoves. What you're going to have to do is step in front of each set of alcoves, alert the enemies, step back a little and blow apart the opposition.

When you get to the second hallway, halfway through is a bend to more alcoves with a door at the end. Two sets of alcoves away on the right (from the door) is a Secret with a door needing the Gold key (Gold door.) Enter the door at the end of the hallway and take out the Guards inside. There are a lot of Food items in the room. Continue through the hallways.

At a bend to go left or right, turn left and kill the Officers until you reach a rocky area with 3 - 8 Guards, 4 Chalices and a Secret containing a First Aid and a Chaingun. Using you new weapon, continue to the right side of the bend you found and kill the Officers. Turn right to behold the FINAL alcove hallway. Kill the Officers and open up the door. Fire a shot to alert several Officers. Kill them, and take out two Officers in an accessible hallway and two Officers in a hallway blocked by a barrel. Go through the next room and the next door(s), but be careful for the SS starting at I Am Death Incarnate! difficulty.

At the end of the empty hallway with the SS, open the door to reveal a huge hallway with tons of Guards. Kill them, turn left and be faced with more Guards. Kill all of them (including an SS and an Officer in a health room to the left halfway down the second red hallway) and continue until you get to the exit.

1) Push the blue wall of the alcove in the very first blue hallway you will face in this floor.

2) Push the blue wall of the alcove in the blue hallway having the prison area behind a door at the end of it (You should come back there after getting the gold key in the Secret no.4).

4) Push the vent wall near the exit door. 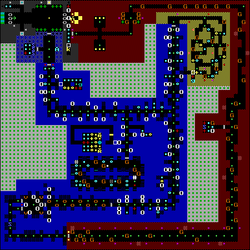 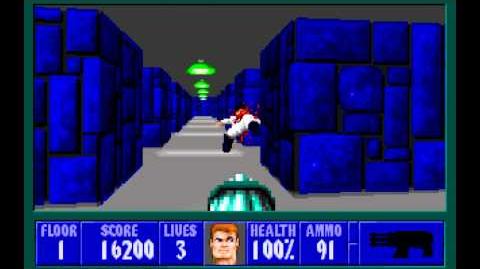