Episode 6, Floor 5 is the fifth level of Wolfenstein 3D episode "Confrontation". It is a relatively straightforward level, and not particularily hard if you find the secrets.

Go to the right and get the gold key. When re-entering the starting room turn right again and head through the gold key door. When you hit a junction you can go either way; you'll end up in the same place with the silver key in either case. Re-enter the starting room and turn right again for the remaining (and silver) door. Just keep following the path until you reach the exit. When you reach a choice of three doors on the far side of one of the rooms, the door straight ahead is the one that allows you to proceed in the level.

All the secrets in this level contain very generous supplies of ammo and/or health, of which there is relatively little outside of secrets.

1. Look on the wall immediately to your right at the start.

2. Beyond the gold door, look on the wall immediately to the right again.

3. At the far end of the room with the wooden island in the middle, where three doors meet, take the left door. There is a secret in the blue stone room behind it.

4. In the long wide grey brick hallways look in the alcoves where SS and Officers came from. If you see a vent on the wall, it's a secret. There are two such secrets.

5. The final secret is beyond the wide part of the aforementioned hallway, on the wall opposite the door to the next room. 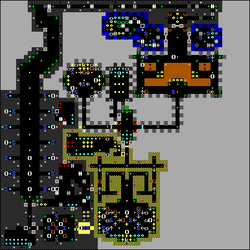 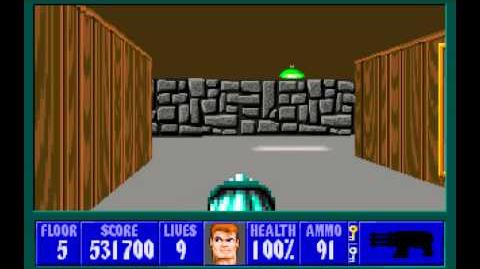