Episode 6, Floor 6 is the sixth level of Wolfenstein 3D episode "Confrontation". It is a very mazey confusing level and the enemies can often come in from every direction.

This level is hard to make a straight walkthrough of so let the map guide you but note that when you see the brown cave walls in the maze, you are in one of its outer layers. Both keys and the locked door to the final area are accessed from an outer layer.

Like the previous level, secrets are filled with useful supplies.

1. The only secret on an inner wall of the maze is on the red brick wall with an eagle flag on the same side of the maze as the silver key.

2. There are two secrets on the outer brown cave walls of the maze, both on its southern end. One is the wall which a brown basket placed, the other is in the room requiring the silver key.

3. The final secret is in the southern end of the double-corridor leading to the exit.(Find it near the pot.) 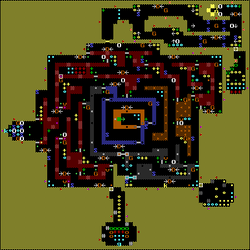 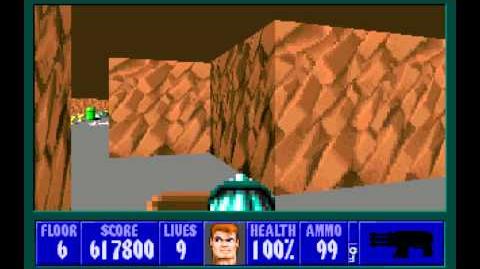