Episode 6, Floor 7 is a level of Wolfenstein 3D episode "Confrontation".

The level opens in a blue stone room filled with one SS and 1-7 Officers, every one of which will be alarmed upon the firing of a weapon. This exits to a central hub which is notable for the presence of several Officers who are not immediately accessible, protected by blocking stone columns. The central hub opens to a room with a gold key, which is necessary to enter a second room for a silver key. The silver key is necessary to exit the level.

The exit itself must be accessed by traversing a series of convoluted tunnels, which are accessed from the central hub and can be divided into three sections:

Beating this level does not take that long if you know where to go, but getting everything is a very long and tedious process. You can kill the column-protected Officers in the central hub from the hub itself, but it's very dangerous. It's recommended to Sprint through the hub and only attack the Officers once you find the Secrets that allow you directly into their chambers. However, they can block the secret walls from moving so this strategy isn't entirely safe if you are going for the secrets.

The entirety of the second and third tunnels (as listed above) are one floor zone, meaning any enemy anywhere in that zone will be alarmed as soon as you shoot. However, they shouldn't be a concern, as the majority of enemies are deafened by Ambush tiles and the ones that aren't, save for a few officers, are trapped anyway.

To get the silver key push a wall immediately beside the column you see it behind. Also keep in mind you do not need to enter the purple maze at all to finish the level.

Beginning at "I am Death incarnate!" difficulty, there is an Officer in the elevator. Beware! 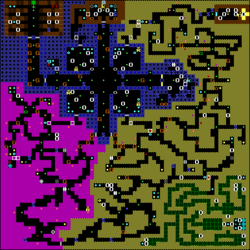 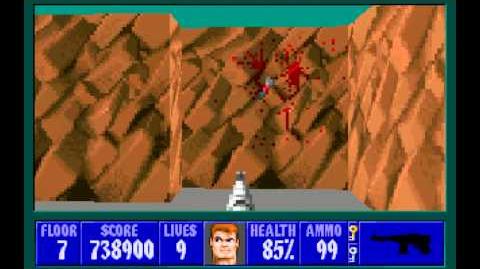