Episode 6, Floor 9 is the final level of Wolfenstein 3D episode "Confrontation". It is symmetrical until the boss area. The level is packed with many, many enemies that will hear you all at once.

All the health and ammo is hidden in secrets, but is in very generous supply within them. A secret to your right in the starting room is practically essential for completion, especially if starting out from scratch. Prior to the boss room, you can get more reinforcing supplies of health and ammo by looking in the alcoves in the steel islands where Officers originate. The final two secrets are in the room with the boss itself. One on the right (from the entrance) contains another stock of health and ammo, while the other on the opposite side contains treasure.

If you find the secrets (even some of them) and use them for cover the level is not that hard to beat. Get ready for a ton of shooting though.

He wields a chain gun and a rocket launcher, but the rockets are easy to dodge. Be careful of the chain gun, though. 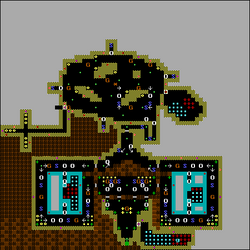 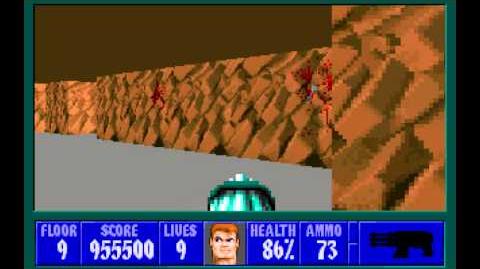