Eva's Hammer is the largest U-boat in the Kriegsmarine and the world. It is seen in the 2014 game Wolfenstein: The New Order, as well in the 2017 sequel Wolfenstein II: The New Colossus. The submarine becomes the HQ of the Kreisau Circle following the raid of their base under the Monuments of Truth by Irene Engel. They are later joined by two major American resistance groups during the liberation of the United States.

The Eva's Hammer is not seen until Chapter 11 - U-Boat where B.J. Blazkowicz stows away inside a torpedo delivered to the U-Boat by one of Klaus Kreutz's contacts. Having boarded the ship, Blazkowicz clears the vessel of its crew and kills its captain, Krieger, to secure it for the other members of the Kreisau Circle. They then use the craft to access Set Roth's Da'at Yichud safekeep below the Atlantic Ocean.

By the final chapter, the Kreisau Circle used the Eva's Hammer to attack Deathshead's Compound. They fired a Spindly Torque from its cannon to attack the defending Nazi forces. They also used the ships nuclear cannon after Blazkowicz obtained the nuclear decryption keys from the Lunar Base to destroy Deathshead's Compound with a nuclear shell.

"This is a good home for us, Caroline. You always made the right call."
―B.J. internally to Caroline after her death.[src]

The Eva's Hammer became the Kreisau Circle's new mobile HQ after the raid of the base under the Monuments of Truth and the subsequent assault on Deathshead's Compound. Because of its status and capacity to launch nuclear shells, it has become a top-priority target for the Nazis to recapture or destroy. The Kreisau Circle then directed the Eva's Hammer to link up with the resistance forces in the former United States, coming under attack from Nazi forces in the Atlantic Ocean.

After BJ's 5-months coma, the Eva's Hammer was attacked by Irene and her death squad to kill BJ and avenge Deathshead's death. It is revealed that the Resistance crew did not sweep up all the Nazi personnel within the U-boat due to its tremendous size. The remaining Nazi sailors led by Nazi Commander Fischer hid in the secret Section F of the U-Boat, the entrance of which was hidden by a locker, and managed to transmit signals for backups. This leads to the Ausmerzer following, tracking down, and attacking the Eva's Hammer. After B.J. disposed off the remaining Nazi sailors and their Drones and Super Soldiers, the entirety of Eva's Hammer is under full control of the Kreisau Circle and the American Resistance. When the Eva's Hammer arrived at New Orleans to pick up B.J. and new allies, the Ausmerzer attacked again, but the U-boat managed to flee with the aid of the nuclear cannon. During the Second American Revolution, the U-boat deployed B.J. to places to eliminate the remaining Nazi chain of command for the American territories.

Eva's Hammer freed from the Ausmerzer.

The living and entertainment area of the Eva's Hammer, which used to a torpedo silo.

The complete model of the Eva's Hammer

A small part of a living quarter in the Eva's Hammer.

The screen of the Engima machine.

The kill-list of Nazi official. in the control, meeting and planning room.

B.J. in the hidden section F of the Eva's Hammer.

The radio room where Nazi commander Fischer transmitted the signal to Ausmerzer to track the Eva's Hammer.

The nuclear warhead stockpile in the section F of the Eva's Hammer.

The Vault in the Eva's Hammer.

Grace Walker's room, which is formerly belong to Caroline Becker. 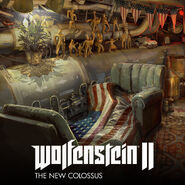 Hacker Central, where the American Resistance and the Kreisau Circle intercept Nazi's communication.

Blueprints of the Eva's Hammer
Community content is available under CC-BY-SA unless otherwise noted.
Advertisement