Return to Castle Wolfenstein
Enemy Territory
The Fallschirmjägergewehr 42 ("paratroop rifle model 1942" or "parachuter rifle model 1942") was a selective fire automatic rifle produced in Nazi Germany during World War II. The weapon was developed specifically for the use with 'Fallschirmjäger' Airborne forces airborne infantry in 1942 and used in very limited numbers until the end of the war due to the destruction of facilities in which it was manufactured. It combined the characteristics and firepower of a light machine gun in a lightweight form no larger than the standard-issue Kar 98k bolt-action rifle. The Paratrooper Rifle is considered one of the most advanced weapon designs of World War II. The United States of America was influenced by its design during and after the war as prevalent in the M1941 light machine gun, T44 prototype light machine gun and M60 machine gun.

In game, it uses 20-round (7.92mm) magazines, is quite accurate and has a moderate rate of fire. It is quite powerful, deals 15 hit points of damage per shot, as much as a boot and more than any other gun except the Mauser and Snooper rifles. This weapon is effective against almost any enemy found in game, if used against Super Soldiers, the rounds tear the target's armour apart. Although it is a scoped weapon, it is still useful when not zoomed. The gun can fire accurately even when unscoped as long as the player is crouching while firing. When turning, however, the gun fires less accurately, and firing while using the scope prevents the player from turning around, forcing his view for a short time, crouching or walking slowly while firing will allow the player counter this issue. When fired from the hip at close range, the FG-42 performs acceptably. It has moderate spread and can still be fired somewhat accurately while moving. The FG 42 can be used to counter ambushes by enemies such as lopers. 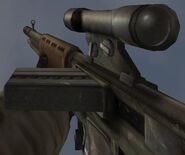 Scope view
Add a photo to this gallery
Retrieved from "https://wolfenstein.fandom.com/wiki/FG_42?oldid=63210"
Community content is available under CC-BY-SA unless otherwise noted.