This article is about the flamethrower weapon in Return to Castle Wolfenstein. For other uses, see Flamethrower.

The Flamethrower is an incendiary device. Flamethrowers can be found during the first level of Deadly Designs. The key of using this weapon without spending too much fuel is to get enemies engulfed in fire rather than spraying at front of them. If used well, one fuel unit is enough to set the enemy on fire. The player can use this weapon with great effect against enemy with no ranged attacks.

It has a fuel tank capacity of 150 and the fuel will be used up in just a few seconds of continued use. 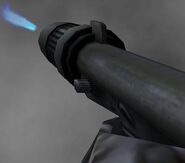