This article is about the flamethrower weapon in Wolfenstein. For other uses, see Flamethrower.

The Flammenwerfer (lit: "Flamethrower") is a weapon in Wolfenstein.

The Flammenwerfer spews scorching hot flames out that will set most enemies on fire. Unlike the flamethrower in Return to Castle Wolfenstein, this flamethrower will only fire for so long before needing to cool down. Besides the fuel bar, there will be a heat bar above it.

The first Flammenwerfer is found near the start of the mission Cannery, in the tunnels BJ uses to infiltrate the Cannery itself. Since the Drache Trooper holding it spawns in the mouth of an extremely narrow corridor, the player cannot miss picking the weapon up.

The Flammenwerfer contains a starting total 30 max ammo, but upgrades may increase this to a total of 60. While 30 units seems low, 1 unit of ammo fires off a burst about one second in duration; enough to set a clumped group of troops on fire, making this an effective close-range urban weapon, and in close quarters it's very effective as well, just keep your distance from enemies and from walls to avoid burning yourself; the self-inflicted damage is slightly higher than the damage that enemy deals. With further upgrading, it may even be used effectively at mid-range. It is the cheapest weapon to fully upgrade, although this weapon is not very practical in the later stages of the game, most other weapon has similar or better combat performance. The flammenwerfer is effective against the enemies that only has melee ability, most notably Sniffers, its a good substitute for Tesla Gun or Particle Cannon.

The Flammenwerfer has a very low base damage of 10 per second (and less towards the edges of the flame), but enemies have fire damage multipliers.

There are a total of 4 upgrades for the Flammenwerfer, with a total cost of $4,500. (the cheapest in game) They are: 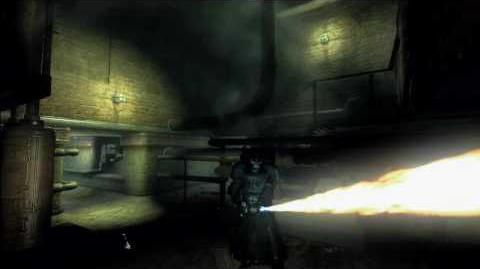 Wolfenstein Flammenwerfer Vignette Trailer in HD
The Trailer of the Weapon.
Community content is available under CC-BY-SA unless otherwise noted.
Advertisement