Forest Compound is the first part of the Weapons of Vengeance mission of Return to Castle Wolfenstein. 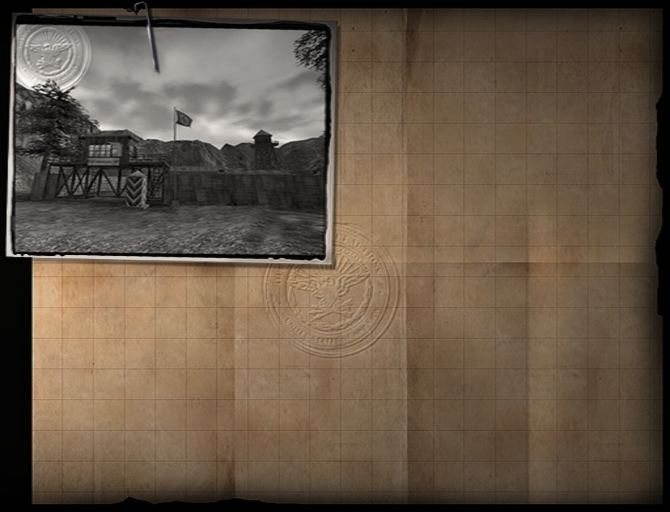 There are 21 enemies on that mission and one of them MUST survive to succeed. If an enemy sounds the alarm, the mission is failed and you'll have to restart. If you destroy every alarm (3 in total), you won't have to worry about being stealthy at all since the only other way to fail the mission would be to get killed. It is recommended to destroy every alarm before you search for ammo (you won't have to only use silenced weapons). If you crouch and fire the Sten in bursts, you can kill snipers in their towers (can be hard but it saves snooper ammo).

Pick up the SNOOPER and use the silenced Sten to kill the enemies in the first building (3). Keep going until you reach the second building (you can hear music) and kill the officer and the guard (2). Form here there are two ways foreward, the bridge on the left side lf the large hill and the hidden path on the right. If you plan to cross the bridge, switch to the Sten and take out the nearby sniper in his tower. pick up his Mauser then use the SNOOPER on the sniper in the other tower. Sten the guards on the bridge (3). Of you are feeling stealthy or want to save ammo take the path to the right. it will take you behind the enemy position and near the second tower. Using the stealth it is possible to kill every guard in this area without using a shot.

Here come the stealthy part: Sten the 2 guards in the tunnel (don't let them shoot or the others will hear+alarm). go through the tunnel door on the right and keep going until you climbed the ladder. go to the right and you'll end up in a small camp with a sniper in his tower, an officer and a guard (3). Sten them down. There is additional ammo for the Snooper in this area. To find it heat away from the road after clearing out the camp.

Use the Snooper to kill the officer in the office above the camp doors (watch out, the windows might stop the bullet! if he sees his window shot he'll run for alarm next to him) then SNOOP the guy guarding the entrance. once they're dead, run to the camp entrance and break the alarm in the red/white stripped thingy. 1/3 destroyed! now follow the wall on the right (not the side where you can break in from a window) and use the mountain side to get a good shot on the alarm in the other red/white stripped thingy and destroy it with your SNOOPER (don't kill anyone yet just in case). 2/3 alarms destroyed! If you have a spare SNOOPER shot you can kill the sniper in the tall camp tower. If you don't have any left, just ignore him for the moment.

Now go back to the camp entrance and find a good angle to shoot the alarm in the (dead) officer office (the hill on the left should give you a nice angle). Use your Mauser to break the alarm 3/3 (SNOOPER if you want but stealth isn't required anymore once the alarms are out). Use the Mauser if you can see people from where you are but DON'T KILL THE GUY NEAR THE RED/WHITE STRIPPED GUARD POST! That person must live to succeed and he'll shoot you with his MP40 if he sees you but will remain around the nearby broken alarm (ai tell him to run for the alarm but he'll get stuck if it's broken). Kill every other enemy and enter the truck to complete the mission. You should get all 2 supply drops now and you will be able to "sneak" into the V2 rocket base.

Sometime the mission glitches and can't be completed (every alarms+non essential enemies killed but can't finish "no alarm sounded"). To fix that, just reload last checkpoint (suicide) and beat the last part again. If this keeps happening for some reason, you could restart that mission, repeat everything but break the final alarm silently while the gate guard is far from it. If it break right in his face he'll activate a broken alarm and you won't complete the "no alarm sounded" objective.

There is an other method which spares you ammo but relies heavily on SNOOPER. This is as follows:

As you emerge from the woods at the first house wait for the guard to walk off to a distance from the house and sten him down, no one will hear. WALK back to the house, the guy at the table won't even know what hit him. Exit through the other door, guard there will probably be on the alert but can be shot before he can react. Cross the lake, collect the stuff and proceed towards the next house. There are two alternatives here. ALT1: wait until the guard rounds the house and WALK in, kill the officer so that he can't utter a voice (if he does the guard is likely to be alerted and starts running, thus inadvertently alerting the guard in the tower - mission failed). WALK out, go round the house (this is risky, tower guard may see you so timing is critical), follow the walking guard and sten him, then proceed to the low wall. ALT2: WALK behind the house and with lean right from beind the corner to see where the guard is (this way he won't see you). As he is coming, WALK back to the previous corner of the house and lean. When the guard is close enough, sten him. The officer inside won't hear anything. WALK ahead up to the corner, lean with binocular to see the tower guard and when he looks away, proceed to the low wall. From there follow the 'covert path' drawn in your notebook close to the cliffs, guards on the bridge won't detect you. Climb up the second tower,sten the guard,kick the alarm,climb down, collect the Mauser.

Here is a bit tricky part: WALK down keeping the tree between you and the bridge guards (recommended to save before attempting,this may take a few attempts), then WALK into the tunnel. Don't stop until reaching the door, open it slowly. Proceed to the ladder,climb up and watch the guard in the building above the gate. When he looks away, run behind the cliffs. WALK down,the officer and the guard at the machine gun post won't see you. Lean from behind the wall and when the officer starts to walk right, WALK to the machine gunner and sten him,then sten the officer (tower guard likely won't see you), then go ahead to collect the snooper & the stuff. Head back and test the snooper on the tower guard, then shoot the guard above the gate (be careful: he stands behind a window so one shot will only cause him to run towards his alarm box so you must shot him once he runs past an open window. Then you can machine-gun down the two guys at the tunnel entrance, interestingly no one will raise alarm on that, however,there is a chance the guard at the gate will run towards you (let him close then sten). Go ahead on the left close to the cliff wall on your right and aim at the water tower. Snoop the guard up there when he is on the middle of his path.

Go up to the left-side slope while aiming towards the crates behind the truck, then snoop the guard when he is behind the truck. Go down to the outside wall,climb in the window,stab the officer, collect the sniper scope. Go back to the door where the officer was, open SLOWLY, then WALK through the gate. Just to be sure, WALK inside the building,kill the officer there. Exit, then, with careful timing, sneak behind the electric boxes on the right, then you're okay. Go to the truck, no one will see you, enter and that's all.