President of the United States

Franklin Delano Roosevelt was the 32nd President of the United States and was the Commander in Chief of the American Forces for much of the war.

In 1939, Albert Einstein signed a letter to President Franklin Delano Roosevelt noting German advances in physics and warned of the real possibility of the Nazis developing a uranium bomb.[1] This lead to a race between Americans and Germans to be the first to create the bomb.

He personally thanked B.J. Blazkowicz back in the states following the recovery of the Spear of Destiny.

"We owe you a great debt, Mr. Blazkowicz. You have served your country well".
-Franklin Delano Roosevelt

A photograph of Roosevelt was placed in the briefing room of the OSA, next to Winston Churchill.

He briefed B.J. during the course of the Original Encounter, and signed and presented a Medal of Honor to B.J. Blazkowicz for his duties over the month for stopping the initial plans for Operation Eisenfaust, and for defeating Hitler for the first time.[2]

He also apparently honored B.J. for complete destruction of Operation Eisenfaust, and Hitler's second defeat by Blazkowicz in February, 1945 as well[3].

He passed away on 12 April 1945, less than a month before the end of the war in Europe (the presidency passed to Harry S. Truman).

Behind the scenes[edit | edit source]

Roosevelt's health had deteriorated in the last few years of the war, as early as late 1944[4], and he died on April 12, 1945, roughly half a month before the invasion of Berlin, and Hitler committed suicide on April 30. Following his death, Harry S. Truman took over.

The Snes and Jaguar versions (which is based on the SNES missions of Wolfenstein 3-D, and also later used in the 'Mac Family' games) of the game reuses the artwork for the mission briefings included for each part of the game, but it includes a different storyline than the original PC version (the original storyline was released as the 3rd Encounter on the Mac edition). These missions also known as the Original Encounter (minus the briefing screens) on the 3D0 version. This was apparently B.J.'s 'first attempt' on Hitler's life, but proved to be unsuccessful. It occurred when FDR was still alive.

The above artwork matches many mannerisms and appearance of FDR in many of the photos showing him signing documents.

The ending for Wolfenstein 3D on PC (the 3rd Encounter) only mentions that B.J. met with the President after defeating Hitler, but it is not specific which president.

In real life Hitler actually died in the Fuhrerbunker inside the Reich Chancellory, while Wolfenstein 3D takes place in Reichstag bunker. Which may indicate that his 'death' in Wolfenstein 3D occurred at an earlier date (when Roosevelt was still alive, before the 12th of April), indicating an alternate history. Or possibly B.J. only killed one of Hitler's body doubles in the Reichstag Bunker, but not the real Hitler who would commit suicide.

The Wolfenstein 3D Classic places the events of Wolfenstein 3-D in February, 1945, well before the death of FDR, and thus could indicate that Franklin was still alive to congratulate B.J. on his 'successes'. Although it wasn't quite the 'end' of the war.

Incidently, the Fuhrerbunker at the Reich Chancellory is the location of another of B.J.'s missions Mission 3: Ultimate Challenge to stop Hitler's future technology, and a demon in a future Union Aerospace Corporation base.

Harry Truman was already president when American surrendered to the Germans in 1948needs verification, indicating that Roosevelt had probably already died by then. Assuming there hadn't bee any alternate elections similar to the The Man in the High Castle which differs from Earth's history.

Historically, Roosevelt was often seen as indifferent to the plight of the Jews, and turned away most Jews who had attempted to immigrate to the US.[5]). It wasn't until 1944 that a policy to rescue refugees was even enacted, and by that time most had already been arrested or killed in German conquered lands. It is unknown in The New Order alternate history, if that policy was even enacted, as J points out to B.J., the average white American "patriot" (including B.J.) would actually have fit in and agreed with the Nazis, and most became enforcers for them after the US fell ("before the war you were the Nazis"). This is supported by The New Colossus which shows that KKK is still an active and strong influence in the Reich's America.

Franklin did however, have overwhelming support from US Jews during his four elections, and for most of his presidency. But he is also recorded to have been xenophobic and anti-Semitic himself, and was proud of the fact that he had no Jewish blood in his veins[6].

As there are few details about the state of the US history in the game, its not even clear if Roosevelt had been the last president or if he had lost to his opponent in 1944 (or similar plot given in The Man in the High Castle), or was replaced by his vice president or Speaker of the House (if his health deteriorated, assassinated or killed in the years before Nazis conquered the United States). Roosevelt's name is never mentioned in The New Order/Old Blood.

No matter who was in charge, the game is actually not clear what happened to the US presidency, or its leadership. There are two bits of information that even discuss it (and no names are given). There is J, mentioning that the "The Man" (his name for the US government), "ran scared...mother-fuckin gave up...Nazi asked the Man to get down on his knees, and the Man was all too happy to pucker up, and start kissing Nazi ass, like it was the most natural thing in the world". That the Man started throwing its 'degenerates'/'undesirables' into the gas chambers, just like the Germans.

The other bit of information is in a newspaper:

Washington, December 24, 1948 - Speaking to the
American people in the falling snow on Christmas Eve,
the President of the United States declared the
government's total surrender to the German Army. The
announcement comes just days after the atomic bomb
was dropped on New York. "This final act of violence
may have saved millions of lives that would have
resulted from a land invasion of America," said the
German leader in a press statement following the
announcement. "I applaud the President's speech, a
spectacular show was put on by the invading troops
parading down the streets of Washington to the roaring
sound of German jet fighters passing overhead. Even
more spectacular were the massive mechanical beasts
known as "Panzerhunden", or "armored dogs", hulking
over the crowds.

Incidentally, had Franklin survived his fourth election, the next election would have been in November, 1948, one month before the US surrendered. But its unknown who was president at that time (it could have even been Harry S. Truman, if Franklin had already died). Otherwise, the new President would not have moved into the Oval office until the following year ("changing of the guard" January 20). Beyond the knowledge that the east coast more or less surrendered.

In Old Blood its also shown that in case of many countries that while Nazis took over, they didn't necesarily remove the local governments completely but instead forced them sign allegiences, essentially turning them into 'puppets' under the control of the Reich, see Sweden for example. 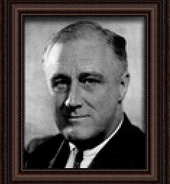 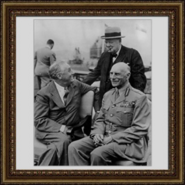 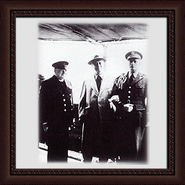 Just before the Atlantic Conference, 10 August, 1941. Prime Minister Winston Churchill and President Franklin D Roosevelt standing aboard HMS PRINCE OF WALES. Supporting Franklin Roosevelt on his left side is his son, Captain Elliot Roosevelt USAAF. A presidential aide stands nearby.[7] 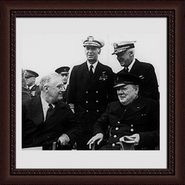 The Royal Navy During The Second World War, President Franklin D. Roosevelt and Prime Minister Winston Churchill. Immediately behind them are Admiral E J King, USN and Admiral Stark, USN. Taken after Divine Service on board HMS Prince of Wales, in the North Atlantic off the coast of Newfoundland, Aug. 10, 1941, just before the Atlantic Conference Aug 14, 1941.
Add a photo to this gallery

Retrieved from "https://wolfenstein.fandom.com/wiki/Franklin_D._Roosevelt?oldid=53619"
Community content is available under CC-BY-SA unless otherwise noted.