Wolfenstein Wiki
Register
Don't have an account?
Sign In
Advertisement
in: The New Order characters, Nazis, Traitors of Country,
and 6 more
English

"Let me tell you how this is gonna work. I'm gonna ask you one question. You are gonna answer that question in a way that I find satisfactory and if you do not... I will saw your head off with this here appliance, you hear me?"
―B.J. Blazkowicz (with a chainsaw) to Keller during an interrogation.[src]

Friedrich Keller was a minor antagonist in Wolfenstein: The New Order. He is portrayed and voiced by Heiko Obermoller, who also provided his likeness in Wolfenstein II: The New Colossus as Kommandant Gruber.

Born in Strasbourg, France, Friedrich Keller's childhood was defined by domestic abuse and poverty. When Germany invaded France, Keller's father joined the resistance. Tired of living in poverty, Keller went to the local SS office and informed the Nazis of his father's ties to the resistance. His family was rounded up and sent to Auschwitz, but Keller was taken under the wing of the notorious General Wilhelm Strasse, whom he has served ever since. Keller views General Strasse as his surrogate father.

Keller was responsible for ordering his troops to murder every patient in the Zakład Psychiatryczny Maławieś. Before that he seems to visit the asylum frequently, taking patients from the wards, and presumably bringing them to General Strasse for human experimentation. Keller hid himself in the trunk of his car when B.J. Blazkowicz killed his men. He was unwittingly smuggled by B.J., who soon discovered him and had him interrogated by finding the remaining resistance fighters. After the interrogation, Keller taunted B.J. and eventually broke loose to stab BJ several times with a screwdriver but BJ was strong enough to resist his attacks and pummeled him into submission. After Keller gave in and revealed the location of where the Nazis kept the resistance members imprisoned, he was beheaded by BJ with a chainsaw. A newspaper clip confirms that Keller's headless body was later found at the bottom of a river close to Gdynia, Poland.

Keller is known to be a very ruthless and merciless Nazi. He considers himself and the Third Reich as superior to all and like all Nazis, is very prejudiced. He also deems the mentally ill as inferior; calling them "Untermenschen (Sub-humans)" just as when B.J. arrives in the asylum. He also has somewhat of a sick sense of humor which is seen when he taunts Blazkowicz during his interrogation with the chainsaw for the sake of his own enjoyment.

Keller in the asylum.

Keller's failed attempt to attack B.J. before being knocked out.

Keller being carried by B.J. to the Oliwa family.

Keller during his interrogation. 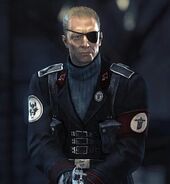