Raise a Floppa - The Loop

Get Psyched! is a message that appeared in the loading screens for Wolfenstein 3D, as well as Spear of Destiny and its mission packs. 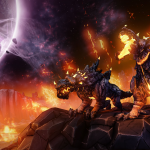