"Nazis built this bridge three years ago. Straight shot to the African front. They're just devouring Africa like they did everywhere else."
―Wyatt to B.J. in Chapter 12 - Gibraltar Bridge.[src]

The Gibraltar Bridge is a megastructural suspension bridge stretching across the Strait of Gibraltar from the mainland European continent to Africa that acts as a means of transporting troops and various supplies to fuel the Nazi Germany war machine in its campaigns on the African front.

The Gibraltar Bridge was constructed in 1957, at the cost of the lives of thousands of slave laborers. Its purpose was to create a shortcut for the supply of military personnel and vehicles heading for the southern African front.

Structurally, it consists of two portions, the upper of which houses the double-laned land route for general use, while the underside of the bridge is a rail system used by the high-speed troop transport trains.

The bridge is mostly occupied by military traffic, but a few members of the upper echelons of Nazi society are allowed to cross the bridge every year for vacations or business trips.

"What the fuck did I just do?"
"I don't know, Captain. Par for the course, ain't it? Mayhem and destruction, like what you always do. It's just you doing you"
―Fergus to B.J. on destroying the bridge.[src]

The bridge is attacked and damaged during the middle portion of the game to intercept a London Nautica high-speed transport train containing high-value Nazi personnel. William J. Blazkowicz, with the help of the newly-acquired Spindly Torque device from the Da'at Yichud's secret stash, manages to destroy a large section of the bridge, derailing the VIP's train in the process, allowing him to infiltrate the marked cabin and obtain the valuable identification papers.

The destruction of the bridge also makes the effort of the Nazis to conquer the African continent slow down due to the fact that their primary logistic route is now destroyed, likely ensuring the survival of African resistance forces until The New Colossus. 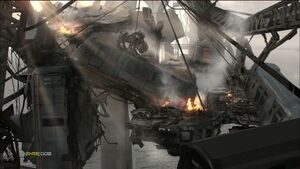 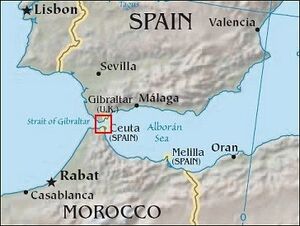 Map of the Strait of Gibraltar, where the bridge is located.
Community content is available under CC-BY-SA unless otherwise noted.
Advertisement