Return to Castle Wolfenstein,
Enemy Territory
Grenades are handheld explosive devices. There are two different grenades in Return to Castle Wolfenstein. One of them is the German Model 24 Stielhandgranate, the other is the American Mk. 2 defensive hand grenade. In-game, the differences between the two are merely cosmetic. Another difference is their quantity. While Stick Grenades can be found on most maps with Nazis, the Allied Grenades are not as common. The player can also "cook" grenades by holding down the "fire" button. This is useful, because the enemies have less time to react before the grenade explodes, but the player can blow themselves up if they hold it for too long, which usually means game over. A common trick is to cook the grenade for 3 ticks if the enemy is close; 2 ticks if they are at mid range. Players should note that human enemies can kick grenades back at the them. Plus, sometimes the enemy will toss a "potato masher" at the player, which can be dangerous because you will receive no warning for this. However, if the player listens carefully, they can hear the grenade bouncing around.

Grenades can gib enemies if they are close to them, it's a good tactic to use them against zombies so that they won't rise again.

The Mk. 2 defensive hand grenade only appears in Return to Castle Wolfenstein.

The Model 24 Stielhandgranate appears in Return to Castle Wolfenstein and Wolfenstein. 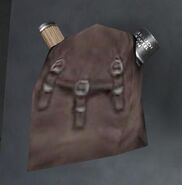