Wolfenstein Wiki
Register
Don't have an account?
Sign In
Advertisement
in: The New Order enemies, Robots, The New Order weapons,
and 4 more

Guard Robots (German: Wachroboter) are large mechs used by the Nazis in the 1960's. They are heavily armoured but slow moving. The broken pieces that fall off them can be used as armour for B.J., when the player collects them off the ground.

The development of advanced mechanized war units was one of General Deathshead's major contributions to winning the war. When the war was over, many of these units were redesigned to function as guard units that could be easily transported to where they were needed. These robots are easily transportable, and can fit into many tight spaces, from being stored in special trucks when not in use, to being able to squeeze into a broad-gauge passenger train as security for high-ranking Nazi Officials. This ease of mobility is also matched by this unit's destructive fire-power stemming from its heavy laser blaster and its power-sapping EMP cannon.

In 1961, The Guard Robot has been replaced in general service in some regions (for example in the American Territories) by the ÜberSoldat robot; this appears to have been done to free them up for service in the ongoing war in Africa. 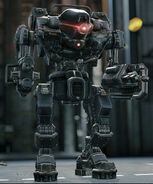 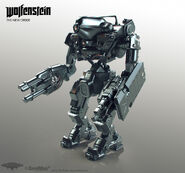 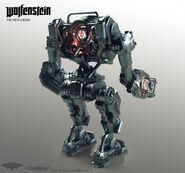 The weakness of the Guard Robot, its energy core behind its back.

Guard Robot with its mechanism revealed

Guard Robot along with Soldier.

B.J. ready to fight a large group of Guard Robot.

The laser cannon of the Guard Robot.
Community content is available under CC-BY-SA unless otherwise noted.
Advertisement