Wolfenstein: The New Order (Mentioned Only)

Hauptsturmführer Hans Grosse is the secondary antagonist and final boss of Wolfenstein and appears in the Wolfenstein Graphic Novel videos.

An imposing and ruthless German engineer who is admired by his fellow comrades.

Hans Grosse was Deathshead's personal bodyguard and a loyal Nazi.

He was once put in charge of Castle Wolfenstein, and was incapacitated by the escaped B.J. Blazkowicz who stabbed him in the back and gave him cervical fracture to the neck, and leaving him on the ground twitching his fingers. He however later recovered (it does not appear they met face to face during that period, and at the time B.J. had 'blonde' hair according to the Krieges, and German records). (Note: this may have actually been his 1st or second encounter with Hans Grosse, see Original Encounter. Note: The Nightmare! memory levels in Wolfenstein: The Old Blood cover the event much in the same way as the original Wolf 3D).

He demonstrates prodigious strength and resilience during a brawl at an Isenstadt tavern. After witnessing a drunk civilian punch a Nazi soldier unconscious, Hans steps in and challenges him to a fight. Though the civilian fights with all his strength, Hans shrugs off his blows and defeats the man with one punch to the face. Satisfied, Hans leaves the tavern, not realizing he brushed past B.J. Blazkowicz (who was wearing civilian or prison uniform disguise at the time).

Hans is seen again holding Kreisau Circle leader Caroline Becker hostage alongside Deathshead in a castle. Strasse orders Hans to shoot Blazkowicz. Caroline tries to free herself and wrestle the gun out of her captor's hands, but Hans shoots her instead of Blazkowicz (failing Strasse's order). Hans and Deathshead escape while Blazkowicz is left to deal with a monstrous being known as the Queen Geist.

During the battle on the zeppelin, Hans executes the traitorous leader of the Golden Dawn, Dr. Leonid Alexandrov, having no more purpose for the man. He then enters the Black Sun Dimension with Deathshead and dons a suit of armor equipped with dual rocket launchers, that also act like dual chainguns strangely, and a similar Thule Medallion. Strasse orders Grosse to kill Blazkowicz again, and this time not to fail him. Using his newfound weapons, Hans eagerly challenges Blazkowicz to a duel. After a prolonged fight, Blazkowicz destroys his foe's medallion, electrocuting Hans to death. His body is then lost when the Black Sun Dimension destabilizes. As B.J. escapes, Hans' final words are "You can't win! DO YOU HEAR ME? YOU. CAN'T. WIN!"

He is mentioned twice first in the character background card for Caroline, and then mentioned by Caroline when she recalled of the event of punching him in the face before she being paralyzed. In particular specific details related to supernatural were left out.

The MachineGames series is a reboot of the series inspired by some of the older material, but taking its own direction. Very little of Wolfenstein was utilized as part of plot of Wolfenstein: The New Order.

"...we asked him if the last Activision Wolfenstein game had any baring on their version to which he replied, "No it does not. We try not to include that game as part of our story."[1]

Hans Grosse in his Wolfenstein 3D version also appears the nightmare flashbacks in The Old Blood, and the events of Wolfenstein 3D are referenced in a newspaper.

Hans is, like a final boss should be, the most difficult enemy to destroy. The fight comes in 4 stages.

In the first stage, Hans is protected by a shield, making Empower necessary. There are multiple rotating pillars, all of which have a certain pool of Veil energy on them. This Veil energy is not infinite, but will regenerate after a short bit. The key to defeating Hans is to wait until he's fired a volley of bullets, jump out, blast him with what the player got, and then go back behind a pillar (The player can also walk in front of a moving pillar as these will move you around the arena, temporarily keeping you out of Hans's line of fire). Mire is also a useful power here, as the pillars move slightly faster than B.J. even when sprinting. Another effective but not so useful tactic is to cover to the pillars and use both shield and Empower and firing until it run out of Veil energy and recharge on the wall. However, it drains Veil energy very quickly. After Hans takes a certain amount of damage, he will fall to his knees, and then rise again and destroy a pillar with a surge of energy. He does this twice, and when he goes to his knees the third time, B.J must run up to him, take his Nachtsonne crystal out that gives him Shield, and slam it into Hans' Thule Medallion. This renders them both unable to use Shield. After this, the machine explodes, and the fight moves to a lower level that is laid out like a mini-maze. There are plenty of corridors.

The weapon found most useful was the fully upgraded Particle cannon, but can prefer a different weapon, experiment if the player want such as the Leichenfaust 44

The second stage takes place beneath the top of the machine, in the inner workings. Gears provide barriers that cannot be walked through, but can be shot through. In this stage, Hans uses Mire to run at incredible speeds, making him just as dangerous as before. The key to fighting him is to use Mire as well. With it, B.J can dodge Hans' hail of bullets (Hans stands still to fire), and retaliate. Combining it with Empower is very helpful, but will drain Veil energy extremely quickly. Keep running and refilling energy, and when Hans is spotted, open fire, preferably with Mire on. Again, he drops to his knees 3 times. After each time, Hans will jump up and fire a volley of rockets down at B.J. Before the first time, Hans seems more likely to engage B.J and will not run away nearly as much. After the first time, he seems much more likely to run away after a little bit of damage. At the third time, B.J must run up and again take his Nachtsonne crystal that gives him the Mire ability out of his medallion and slam it into Hans', causing another explosion. Right now you only have Veil and Empower left.

Again, the weapon found most useful was the fully upgraded Particle Cannon. The Leichenfaust 44 is a great choice too, but beware it destroying cover. If your heavier weapons are running low, conventional firearms should serve you well, though it will take a while to beat him down. Save Flammenwefer or Tesla Gun ammo if you can, it can come in handy later.

The third stage is different. B.J does not fight Hans in any real area, but rather, follows him along a stone path leading back up to the top. When B.J hits the ground, he will have the chance to stock up on much needed supplies. Following the stone path, Hans will fire volleys of rockets at B.J until he destroys a section of rocks highlighted in red. The Panzerschreck does the job very nicely. Continuing on, Hans appears far away from B.J and will fire volleys of bullets from his chain guns, but using Empower and the Kar98 works out with minimal loss of health. Keep going, and B.J will find a Veil ladder to climb, but be ready, Sniffers are at the top. Before climbing, it is a good idea to throw a couple of grenades up there, to take out a few before making your way up. A good weapon to kill any remaining Sniffers is the Tesla gun, it can also track and damage multiple sniffers at once, but the battery runs dry very rapidly. Beware, some sniffers are equipped with explosives, which detonates upon death. Due to this, keep distance. There are about 5 at the top, and more will come pouring down the path, so be patient. Flamethrowers will incinerate them from a safe distance, so if you have it, use it. After they are all dead, continue, and Hans will be at the edge of floating Veil energy. Deal with him as seen fit, and move into the portal, and get ready for the final stage of the fight.

The fourth and final stage takes place in the same place as stage 2. He really isn't very difficult at this part, as there are less obstructions (the gears are gone, along with most of the ruin walls), and he doesn't possess the veil powers he used to. He still does possess the dual chain guns, though, so be very careful not to get overconfident. As soon as B.J reaches the top, aim at the center platform of the center tower. Hans will yell "I will kill you for this, Blazkowicz!", and land on the center platform. At this point, Hans is a sitting duck until the platform lowers to the same level BJ stands on. Use Empower and fire away with the Particle Cannon or any strong weapon of your choice, using cover when needed. You can also combine Empower with the Leichenfaust.44. If you risk losing some more health to fire some more shots you may have defeated him when the platform reaches the level you are. Once Hans falls for the final time, B.J approaches, pulls out his Empower Nachtsonne crystal, and jams it into Hans' medallion, destroying the Black Sun machine, and Hans along with it. B.J is ejected back into the real realm, seeing Deathshead fleeing, yelling "Damn you Blazkowicz!", and he follows, as the zeppelin explodes. B.J escapes, seeing the Zeppelin crash into the Castle. The destruction of the zeppelin and the portal renders his Thule Medallion useless and so he throws it as far as he can. Spoil the entire Nazi plan for world domination once more.

Hans Grosse at the Tavern Cut-scene. 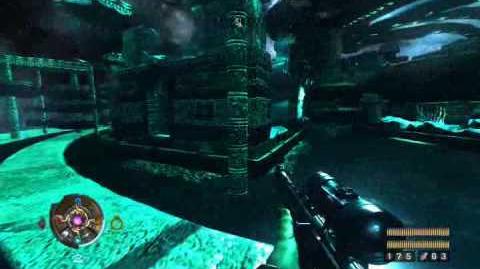 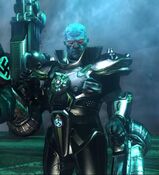 Grosse in the Black Sun Dimension.