Wolfenstein Wiki
Register
Don't have an account?
Sign In
Advertisement
in: The New Order enemies, Robots, The New Order bosses,
and 4 more

Wolfenstein: The New Order
Heavy Robots (German: Schwerer Roboter) are large mechs used by the Nazis in the 1960s to suppress all uprising attempts after their victory of World War II.

The game describes the robots as such; these are military grade robots, the state-of-the-art in the field of advanced mechanized unit design. These bad boys carry Superlaser cannons and have a protective layer of hard steel. Only two are ever seen in the game. The first one is encountered at the end of the mission London Nautica, acting as a boss. The second appears near the end of the Lunar Base, blowing up a part of the tram the player is escaping on thus disabling it, forcing the player to continue on foot. This one cannot be fought.

The Heavy Robot in the London Nautica is armed with two attacks; laser cannons and EMP grenades. Upon detection, the Heavy Robot will fire a barrage of heavy laser fire at B.J before firing an EMP blast almost immediately after. These lasers do relatively high damage on harder difficulties, so it is advised to take cover. EMP grenades have an approximately 5 second charge time before exploding, damaging the player and draining the Laserkraftwerk. Making contact with the grenade itself before explosion can also damage the player. The EMP grenades are primarily used for flushing B.J out of cover and are proven to be quite annoying if the player sticks to one of the side rooms in the arena.

The robot appears to have no resistance to Tesla Grenades, which will deactivate the robot for a while if it is caught in a Tesla Grenade's AoE. 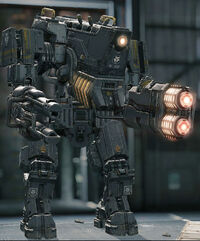 In-game screenshot of BJ battling the heavy robot in the London Nautica. 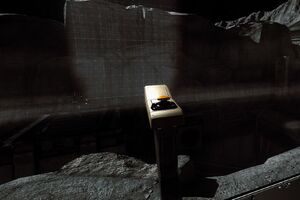 Heavy Robot as Seen on The Lunar Base 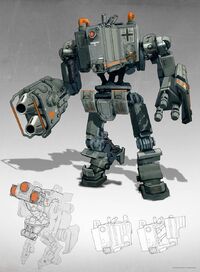 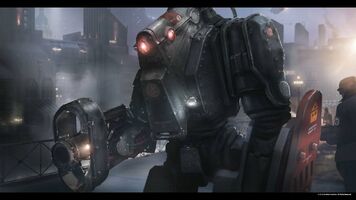 More concept art. Note the mix of angular and rounded surfaces; the final design retained the boxy shape apparent in other concepts. 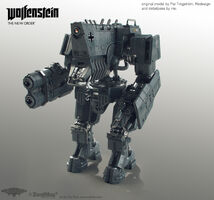 3D render by Tor Frick, combining elements of the concept art and the in-game design. 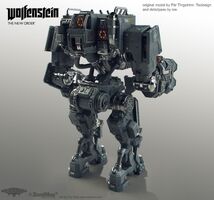