Wolfenstein Wiki
Register
Don't have an account?
Sign In
Advertisement
in: Wolfenstein: The Old Blood, Nazis, Nazi Soldier,
and 2 more

The Heavy Soldier is an enemy encountered in Wolfenstein: The Old Blood. They are the 1946 counterpart of the 1960 Nazi Fire Troopers.

Heavily armed and heavily armored, these soldiers have traded mobility for protection and superior firepower. Armed with combat shotguns they wear sealed and armored suits that have an integrated closed respiratory which draws oxygen from pressurized tanks worn on the back. 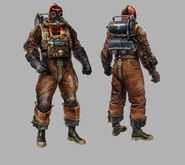