Three pin on his back.

The Heavy Trooper is one of the strongest non-boss enemy types in the game, wearing heavy armour with a Veil-infused powerpack for their Particle Cannon. They can be detected quite easily, as they make a stomping noise when walking. They are recognized by their distinctive armor and venting cylinders[1] attached to their shoulders.

The first Heavy Trooper is encountered at the end of the second large room in the mission Church, and acts as a miniboss. After this they are the most frequent of the higher-tier enemies, often spawning among waves of soldiers, and can even be found in town hubs. A Heavy Trooper is guaranteed to appear when the player exits the building containing the entrance to Church; he will chase down two Golden Dawn agents and kill them with his shockwave attack before turning on the player. After mission Hospital, Heavy troopers are more common in Town Hubs, sometimes they will fight with friendly NPCs before you encounter them.

Heavy Troopers have a large armoured suit with a Veil-infused backpack to provide energy for their weapons, primarily the Particle cannon. They drop their cannon on death, which give the player the Particle Cannon the first time and a Particle Reservoir all subsequent times. 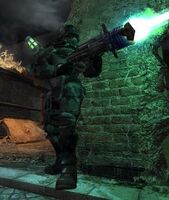 Pre-release image of a Heavy Trooper with a Tesla Gun firing a Particle cannon beam.

Concept Art of the Heavy Trooper.

Another Concept Art of Heavy Trooper featuring with different weapons.