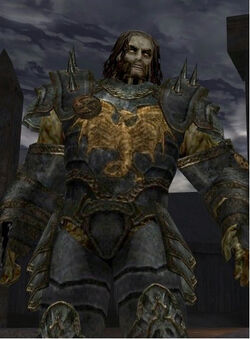 Emperor of the German Empire

In 943 AD, a benevolent wizard by the name of Simon the Wanderer confronted Heinrich, seeking to end his reign of terror. After a brief battle, the mystic realized he cannot destroy Heinrich, so he instead magically seals the tyrant in limbo and lock for eternity.

He was survived by his oldest son, Otto I, who would go on to become the Holy Roman Emperor.

After a thousand years, in 1943 Heinrich was freed by SS High Priestess Marianna Blavatsky and was eager to resume his reign of terror. Unfortunately he sensed the presence of the American soldier B.J. Blazkowicz who confronted him in a duel. After a fierce fight, Heinrich (who was now a Zombie Lord) was ultimately destroyed by Blazkowicz, ensuring that the warlord's powers will not be used by the SS Paranormal Division to complete for their world domination.

The graphic novels seem to suggest that Heinrich I was resurrected to replace Hitler as leader of the Third/Fourth Reich, while he was out of commission from an earlier attempted assasination attempted by B.J. This may be a reference to the Original Encounter events (or the order and dating of Wolfenstein 3D [the 3rd Encounter] era was pushed back before 1943, similar to the RTCW strategy guide which places events of Wolf 3-D before RTCW).

An image of an unzombified Heinrich may appear in the paintings in Castle Wolfenstein in The Old Blood. The Castle is said to be have been built by the eldest son of Henry the Fowler, Otto I.

Heinrich I is the real name of the first king of Germany, also known as Henry I or Heinrich der Vogler/Henrich der Finkler(lit. "Henry the Fowler). He was not an evil conqueror in real life, spending just as much time defending Germany from invaders as expanding it, and his legacy was the modern state of Germany. By the date given in the game for his imprisonment, he had actually been dead for four years before he was sealed away and when the First Reich collapse (however, he is already portrayed as undead and immortal by that point as well, seemingly risen from his original death).

There are indications that Heinrich Himmler saw himself as the reincarnation of Henry, who was proclaimed to be the first king of Germany.

Himmler traveled to Quedlinburg several times to hold a ceremony in the crypt on the anniversary of the king's death, 2 July. This started in 1936, 1,000 years after Henry died. Himmler considered him to be the "first German king" and declared his tomb a site of pilgrimage for Germans. In 1937, the king's remains were reinterred in a new sarcophagus.

Upon Closer inspection, It is noticeable that pieces of Heinrich's armor fall off(Id est: "Ablative Armor") to indicate how much damage he has taken. More Specifically as he takes damage he loses his left pauldron, vambrace, and gauntlet, and half of his breastplate.