Herr Faust (German for "Mr. Fist") is a giant robot developed by Nazis and put to keep the management of Camp Belica.

This terrifying robot guard is used for a variety of tasks inside the camp beyond discouraging prisoners from trying to escape. Herr Faust served as executioner in the camp, it kills its victims by placing a metal skullcap over said victim's head and then driving a large pneumatic spike through the forehead and the brain, similar to a captive bolt gun used to stun cattle prior to slaughter. This can be seen first-hand by not handing Set Roth the battery he asks for when Herr Faust is approaching him. Since Set does not receive the device, he is unable to take control of Herr Faust, which kills him, then walks over to you and places the skullcap over your head, which allows you to see the pneumatic spike in first-person view for just a moment, before it is driven through your head, resulting in instant-death, and a game-over.

If he is handed the battery, Set Roth, with the help of B.J. Blazkowicz, reprograms the robot, using it to help their escape from Camp Belica. The robot killed several guards and then maimed Frau Engel, permanently damaging her face. Afterwards, B.J. takes manual control of it, killing many guards and smaller robotic enemies, eventually helping all the other inmates escape the camp. 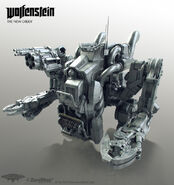 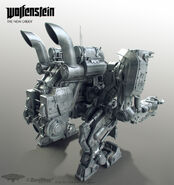