Wolfenstein Wiki
Register
Don't have an account?
Sign In
Advertisement
in: Characters, Kreisau Circle, The New Colossus characters,
and 5 more

Horton Boone is the leader and self-appointed preacher of a New Orleans resistance cell in the US. He is shown to be a drunkard, communist, Marxist-Leninist, Bolshevik, and an anti-capitalist as well as anti-fascist.

He is one of the most important and famous Resistance leaders in the US.

Before the Nazi's occupation of the US, he highly advocated against the military intervention in Europe conducted by the US and its Allies as he felt this action was simply meant for the capitalists of Wall Street to fill their pockets with war profits while sending innocent young men to their deaths. During WWII, he had a small gang advocating civil rights as part of their communist beliefs. After the Nazi's occupation of the US, he formed the Resistance to fight back against the Nazis with little success to the point that he nearly gave up hope, merely fighting to survive in the isolated ghetto of New Orleans until, after an initial disagreement over political ideology, he is recruited by BJ for the Kreisau Circle. His group also managed to steal and reprogram a Panzerhund. Horton meets with Anya and Fergus/Wyatt, getting on the Eva's Hammer while B.J. distracts the Nazis until he returns on the sub.

According to Grace Walker, Horton has all connections to all remaining Resistance cells in the US. As the result, it is important for BJ to recruit him to rally and unite all the Resistance cells to ignite the second American Revolution.

Boone aids the resistance by telling them to defeat the Nazis, is to stop the Ausmerzer, and B.J. knows that it has an security system called ODIN. After returning from Venus, Horton is part of B.J.'s surprise party, and is eventually slapped by Shoshana. The following morning, Horton helps B.J. and Anya attempt to wake Fergus by using the hangover cure that he has. In Wyatt's timeline, Horton doesn't appear until B.J. assists in finding Wyatt and stopping him from committing suicide.

After B.J. and the resistance gain control of the Ausmerzer, Horton, along with Grace, Anya, B.J., and Fergus/Wyatt enter Jimmy Carver's show to assassinate Frau Engel. After doing, Horton joins the group on telling America to stand against the Nazis, starting the second revolution. 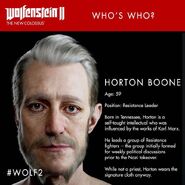 Horton getting into a heated argument with Blazkowicz.

Horton with B.J. and Paris Jack with a reprogrammed Panzerhund.

Horton tries to make Shosana to drink his special alcohol.

Horton getting slapped by Shoshana.

Horton makes the statement about all the lies the Nazi fed to the US people all these years after Engel's execution.

Horton with Wyatt and Grace.

Horton's poster among resistance members, mission to save Dimitri Fedorov on Venus.