This article is about the battle rifle in Wolfenstein. For the version seen in Return to Castle Wolfenstein, see Mauser Rifle.

The Kar98 is a bolt-action battle rifle found in Wolfenstein.

The Kar98 was a shortened and modernized version of Germany's venerable Gewehr 98, and served as the standard issue rifle of the Wehrmacht throughout the Second World War. Despite being gradually replaced by semi-automatic rifles like the Gewehr 43 rifle during the course of WW2, the Kar98 Mauser still remained in service in Germany until the end of the war, and was favored for its reliability and simplicity. The weapon had a five-round integral magazine fed with stripper clips using the 7.92x57mm Mauser cartridge.

The first Kar98 is dropped in a narrow hallway after planting dynamite in Train Station. Like the MP 40, soldiers equipped with the Mauser rifle are very common and ammo is plentiful. A scoped version is used by Snipers which share the same ammo, however these soldiers inflict far more damage than scopeless soldiers, almost killing the player in a single shot.

Kar98 ammo can be found in the form of dropped weapons, large gray ammo boxes, or ammo pouches.

By default, the Kar98 is unsuited to use as a primary weapon due to its low ammunition capacity, somewhat high recoil, slow rate of fire and sluggish reload, but is an excellent weapon to use when faced with enemies at long range or with weakpoints. The Kar98 can kill a Heavy Trooper in just three well-aimed shots. The bayonet upgrade transforms it into a very capable melee weapon able to kill even Scribes and Elite Guards instantly, and it allows the player to easily defeat Sniffers without wasting ammunition. The bayonet is also useful for stealth kills on unalert enemies, such as in the Officer's House mission. It is also a useful back-up option if you don't have time to reload and are cornered by enemies. Early in the game, the Kar98 will have to load each round one by one, making the stripper clip upgrade the most essential of all upgrades for this weapon. This problem can be partially countered by reloading after each shot. If you have a hard time using scope, use Mire to give you more time to aim. It deals 20 points of damage, more than twice the damage of either the MP 40 or MP 43, even with upgrades. Big Bore allows it to deal 40 points of damage. The bayonet deals 25 damage. 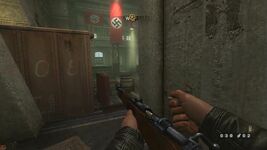 Reloading a Kar98 without a stripper clip 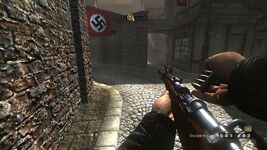 Reloading an empty Kar98 with a stripper clip 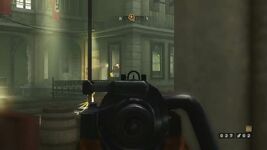 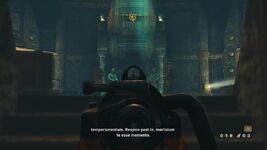 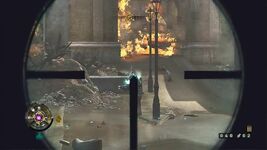 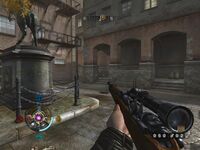 Kar98 equipped with a scope.
Community content is available under CC-BY-SA unless otherwise noted.
Advertisement