Wolfenstein Wiki
Register
Don't have an account?
Sign In
Advertisement
in: Kreisau Circle, Allies, Return to Castle Wolfenstein,
and 3 more

Kreisau Circle agents are members of the Kreisau Circle. They are armed with MP40s in both Return to Castle Wolfenstein and Wolfenstein. In Wolfenstein: The New Order, Kreisau members does appear, but no longer conduct any serious operation until B.J. joined the group.

Only two appear on the first part of Deadly Designs. The player must help them defend the deserting German scientist against attacking Nazi soldiers.

They help B.J. throughout the game and fight against the Nazi Army in Isenstadt, they can sometimes seen using the mounted MG 42 to defend their base. Some of them are scripted to be killed, an example is in Church mission, where a team of agents got wiped out by a Veil Heavy Trooper.

Ludwig Kessler is a Kreisau Agent, his deceased wife may have been one as well.

After B.J. left the Asylum in Poland, he and Anya traveled to Berlin to find the remaining resistance fighters. Its later revealed that they are kept in Prison, B.J. then infiltrated the Prison and find Wyatt/Fergus (depending on who survived the 1946 prologue) and he invited B.J. to join the Kreisau Circle in Berlin.

Inside their secret HQ, there are very few Kreisau Circle agents left, and they are now given names rather than being nameless in previous two games. Desipte this, they still conducted some successful operations that led to the mission in Camp Belica, to find the only known Da'at Yichud member Set Roth, which also make some survived prisoners escaped the camp, who later become new members of Kresiau Circle agent. The agents are not armed while in the HQ, while on mission, they are mostly armed with Assault Rifle 1960. 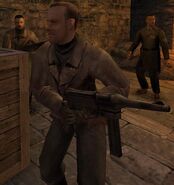 Kreisau Circle agent with a MG 42