A completely quadrupedal machine, it combines the appearance and aggressiveness of the Kampfhund with the agility, armor, and firepower of the UberSoldat. As stated in the name its main trait is its powerful laser which shoots from its single eye. Three harmless beams will shoot in a rotating motion from its eyes as a warning that its weapon is charging, before firing a very powerful blast. The Laserhund also has a melee attack when it gets up close, slamming itself into its enemy utilizing its hard metal armor and heavy weight, usually knocking their opponent off their feet. Combined with its speed and durability, the Laserhund is one of the more challenging foes one will face in The New Colossus.

The first Laserhund appears on Venus in the Commander section, flying through the glass and attacking the player (even if the player stealth their way). Afterward, they appear more frequent, often coming if the player has set off the alarm, or they are seen walking around the vicinity on patrol.

the Laserhund returns in Youngblood, along with a rarely seen variant known as the Turmhund, which, unlike the former, has 2 tier variants, and has a laser cannon affixed to its left side, which functions same as the Laserhammer. Turmhunden are almost exclusively found in the Treasure Hunt mission, although they are rare finds in the game in general.

The Laserhund's first appearance on Venus.

Concept art of the Laserhund. 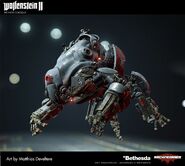 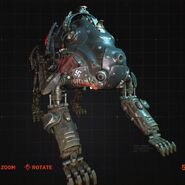 The Laserhund in Wolfenstein: Youngblood.

The laser cannon of the Turmhund