None
The Leichenfaust 44 (lit. "Corpse Fist") is a weapon in 2009 video game Wolfenstein. Another example of the Nazis' experiments with the Black Sun Dimension. Created in the Castle of Isenstadt, it fires a spherical globe of energy that, on contact, detonates, instantly disintegrating almost any target, and levitating everything within its blast radius for a few seconds.

Wielded by no enemies, it is first found in the Castle of Isenstadt during the seventh mission "Castle" and the game is designed to ensure that the player obtains it, because progress is blocked by a heavy gate that requires the Leichenfaust 44's anti-gravity effect to open. After the Castle mission they can be found scattered within several levels. Ammo pickups are also rather scarce.

The Leichenfaust 44 fires a large spherical pulse of veil energy that detonates on contact. The detonation is powerful enough to completely disintegrate enemies (even able to kill an Altered with one shot), and also disrupts gravity around the point of explosion, causing debris (and the disintegrating remains of enemies) to float into the air for a few seconds, before crashing back down to the ground; you will need this effect to open heavy portcullis-style gates sometimes, as it causes them to float upward. Like the Panzerschreck, it is not advisable to fire it at close range, as it can seriously hurt B.J. too. This weapon is useful against most enemies, but its slow projectile, tremendous damage, and rare ammo means it is best saved for use against bosses.

Although it cannot kill the Heavy Troopers directly, it will cause them to float a few inches off the ground, rendering them unable to fire at B.J. and the blast will possibly destroy one or both of the canisters on their shoulders. When the effect wears off of the Heavy Trooper, it takes a noticeably long time for them to stand up straight again, giving the player time to finish them off. 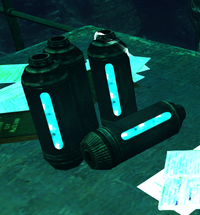 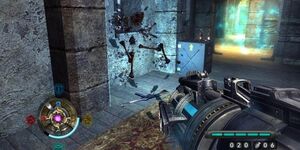 A player disintegrates an SS soldier in the Castle
Community content is available under CC-BY-SA unless otherwise noted.
Advertisement