Edit
watch 01:20
What is the London Monitor?
Do you like this video?
Play Sound

The London Monitor (German: Das Auge von London, lit. The Eye of London) is a colossal robot designed by the Nazis to police the city of London, following a similar design philosophy to the Baltisches Auge. It appears in Wolfenstein: The New Order as the concluding boss fight of chapter 14.

Created by the Nazis from the remains of the Baltisches Auge (or the mech itself if it was not destroyed in the prologue), the London Monitor was created in response to the urban unrest in London caused by British resistance fighters in the so-called August Uprising of 1951. After crushing the uprising, the machine became a weapon of terror and symbol of Nazi dominion; any brave Londoners who dared to fight the Nazi riot control troops and survived no doubt met their end at the hands of the robot's extensive arsenal. A news article found in the London Nautica suggests that the mere presence of the Monitor is sufficient to disperse a riot, though this could be hyperbolic propaganda to whitewash the regime's use of the machine to massacre dissidents.

Fortunately for the oppressed Londoners and unfortunately for the Nazis, the Monitor met its end around November-December 1960. Following B.J. Blazkowicz's attack on the lunar base and subsequent return to earth, the Monitor was deployed to kill him when the London Nautica security staff failed to do so for a second time. In the ensuing battle at the front of the damaged London Nautica building Blazkowicz managed to destroy the Monitor's engines and weapons, putting an end to London's most fearsome oppressor. Given its status as both a potent weapon to crush dissent and a prominent symbol of oppression, its destruction caused widespread riots across London and resulted in far more active resistance to Nazi rule in Britain.

As a counter-insurgency and riot control unit the London Monitor's arsenal is varied but generally oriented towards taking on large numbers of light infantry in an urban setting. The engine compartment in the lower part of its body mounts three sponsons or ball turrets facing in different directions, each housing a trio of machine guns. The hatch on the bottom face of the engine/turret area is surrounded by three flamethrowers to restrict hostile access to its engines. Heavier weapons are mounted in the head/turret on top of the body: the red cyclopean eye on the front of the turret is actually the focusing lens for an energy weapon which must be charged for several seconds before firing, and two pylons on either side of the turret each mount three multi-tube missile launchers.

Before the boss fight[]

"Your sentence is death!"

"Your crime is unpardonable."

"Your aggression is unforgivable."

B.J. facing against the London Monitor.

The London Monitor about to fire its missiles.

The London Monitor being defeated 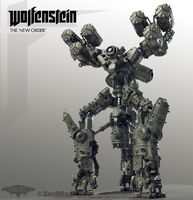