K.I.A.: Killed in combat by the Blazko Twins.

"This isn't over.. We shall all die, but when judgement falls... I will be seated upon the altar... in his heavenly kingdom above. As the rightful Führer... of the Fourth Reich!"
―Lothar to the twins before his death.[src]

Oberstgruppenführer Lothar Brandt, also going by the alias Jacques Martel, is the main antagonist of Wolfenstein: Youngblood. After the Second American Revolution, and the death of General Engel, he was appointed governor of Neu-Paris, but as the Nazi regime began to decline, he became disillusioned and sought contacts in Berlin in order to form a secret organisation called the Fourth Reich to topple the Berlin regime.

Lothar Brandt was a son of a prominent Nazi party politician and a silver screen actress. He rode up to the rank of general in his time in the Wehrmacht. In 1957, he met and married Julie "Juju" Brandt, and they would have three children at an unknown time. Julie would please Lothar by torturing resistance leader Emmanuel to death.

After the Second American Revolution and the demise of Adolf Hitler, he became disillusioned and dissatisfied with the current regime which he saw as weak and incompetent. As far as Lothar was concerned, as long as they are in charge, the Third Reich will fall. He gathered like-minded individuals in the German Armed Forces and created a secret organisation aimed at toppling the current Nazi regime from the inside, so he could take over as Hitler's successor and found a Fourth Reich.

His activities placed him under at least some suspicion by the Gestapo. Eventually, the regime in Berlin got wind of his activities, and he and Julie fled to the Paris underground just as agents from Berlin arrived in Neu-Paris, though he did not escape unscathed as evidenced by the scars on the left side of his face.

Toward the end of the game's story, it is revealed that the Brandts have infiltrated the French Resistance, Lothar disguised as the mute wood-carver Jacques Martel with Julie as the resistance leader Juna/Juju. His ultimate goal was to retake Paris and commence "Operation Ascension", which would topple the regime in Berlin. Julie aided him in this goal by manipulating the Blazkowicz twins and Abby Walker, first into killing General Winkler who was meant to replace Lothar as the ruler of Paris and then by hacking the computers of the Brother Towers that connect Paris and Berlin.

The girls succeed in accessing the three computer towers but Abby also decrypts a message from Lothar to his ally Messer, and downloads a picture of Lothar, realizing that he was Jacques. While this was going on, Lothar and Julie planned to sedate the girls' wine, and slit their throats, which Abby learned by using her microphone. When Lothar and Julie were ready to kill the twins while gloating about their plans, the twins attacked, but they escaped as the girls had to help Abby (who was stabbed in the eye by Julie). Lothar and Julie returned to Lab X, and he spoke over the intercom that he was leading again.

While in the Siegturm tower, Lothar criticized Julie for failing to sedate the girls, feeling humiliated that they were outsmarted by them. Despite appearing to want to kill her, they have interaction, and he orders General Messer to start the first ascension. Julie notices that the twins are coming, and Lothar orders her to stand in front of the elevator despite her concern. Julie is killed by the twins, and Lothar suits up to fight them and is shocked to see them with powers (having gain the God Key powers from their father). Though Lothar appeared to have the higher ground due to his power suit and soldiers, however, thanks to the ingenuity of the Terror Twins, Brandt is eventually killed on the roof of the Siegturm.

However, his death is not in vain as his second-in-command Messer and the rest of the Fourth Reich managed to successfully conduct a coup in Berlin, taking control of the Nazi empire for their own in possible to plan a counteroffensive to the Allies to retake all the nation that had reoccupied ever since the victory of World War II.

Lothar Brandt is known to be ruthless and cunning, having outwitted the Berlin regime for a while by hiding in the Paris underground and infiltrating the French Resistance, yet he is also loud, bombastic and battle-hungry when comes to fighting as he expresses great excitement when facing the Blazkowicz sisters. He is also skilled in combat, possessing an advanced power suit modeled after a Da'at Yichud design, only equipped with powerful weapons such as grenade launchers and a jetpack. He is also shown to be quite a megalomaniac, as he considers himself the true successor to Adolf Hitler, and states that he will become a God once his plans are fulfilled. He later states that he would be a God during his last battle against the twins, and tells them that it wasn't over.

Lothar shows himself to be deeply paranoid, as he correctly believed that Berlin was on him, which would lead to the Third Reich to attack his hideout. His paranoia greatly increased, as he started to see himself becoming isolated to everyone, even his wife (stating in one of the readable's that she was beneath). Despite his feeling of isolation, he believed that he was superior, and didn't like being humiliated, as he tells Julie in Lab X. He also showed himself to believe that he was superior, and disliked the girls, calling them spoiled, and was angered at Julie's failure to kill them. By the time he returns to the Siegturm, his success fueled his ego and lack of patience, as he cowardly forced his wife to take on the twins before they left the elevator. This is further proved by his lack of shock of her death, as he attempts to kill the twins.

The first fight against him is quite simple. You just need to catch fired ammo from him with God Key power and release it against him. He will also just fire his guns against you, so there would be no problem dealing with him this time. After hitting him with enough firepower and the use of the God Key power, Lothar will jump out a window, and you will have to deal with Nazi soldiers and Super Soldiers.

However, the fight in Siegturm rooftop will be quite tough, so it is strongly recommended to keep shared lives intact before reaching him. At the rooftop, He will fly around with jetpack and fire artillery rocket against you, in order to shoot him down, you need to aim at his jetpack, but soldiers protecting him will pack a quite damage if they are left alone, so it is suggested that you take them out first. If you killed them all, they will not respawn. So, in order to aim his jetpack, you need to get close to him. This is easier said than done, as he will fly around as soldiers will shoot at you, so you need to be careful when aiming for his jetpack, and watch your health and armor.

After he was shot down, second fight will not start unless you get close to the floor near the tower he went down, so you can refill health, armor, ammo, etc. There are tower doors that can be opened with the ElektroKraftwerk.

On second fight, He will bring out strong laser cannon and submachingegun, Laser weapon cannot be catched by God Key power, so you need to use your gun against him. Preferably, the Elektrokraftwerk. He will call for close air support by Düsenjäger jet, and this will be deadly. Room inside one tower can protect you from the bombing. He is very durable, so you need to throw everything you have at him.

"Lothar, my dear. It's time."
"The degenerates are asleep?"
"Yes."
"Are you ready to shake up the establishment in Berlin, my darling?"
"Reshape the vision of our Deadly Departed Leader and create a Fourth Reich. Ascend to the skies and create a new world above the clouds."
"Heil the Fourth Reich.

"You sure they are sleeping?"
"Of course! Look - merci girls. Thank you for all your help! Give young girls wine, cigarettes, and adventure, they will believe anything."
"Okay, enough this. The Führer's doomsday clock is ticking. We have to get back inside Lab X and prepare our organization for the Berlin takeover. Let's get this over with. Pull her head back. What a wonderful feeling. To extinguish the blood line of Terror Billy."
―Lothar and Julie gloating, preparing to kill Zofia.[src]

"Feels so good to be back here."
"I trusted you Julie."
"Hm?"
You were suppose to ensure they were drugged and you failed."
"We made it, did we not, darling?"
"Have any idea how humiliating that was? Being outsmarted by three degenerate teenaged girls."
Lothar, please-"
"Fooling those spoiled bitches was the only way to get rid of the General and the Überkommandants and get back Lab X. I worked so long to realize my dream. And just as we close in on the finish line, you almost run everything."
"How could I-"
"Shut up!"
"You still love me, don't you, Lothar?"
"What do you think?"
"No, no, no, no."
―Julie and Lothar in Siegturm.[src]

"I will send you girls straight to hell!"
―Lothar to the twins during their fight.[src]

"Admit it! You have no chance against me, girls - the heir to Adolf Hitler!"
―Lothar to the twins during the fight.[src]

"I am the only one who can save mankind...from the apocalypse!"
―Lothar during Phase Three of his bossfight.

Lothar Brandt is blacklisted by the Nazis.

Lothar with his wife, Julie (Juna).

Lothar and Juju discuss on killing the girl as Abby sees Lothar's picture.

Lothar gloats to Julie on killing the daughters of B.J. Blazkowicz.

Lothar criticizes Julie for her failures.

Lothar getting ready to tell Messer to start the first ascension.

Lothar shoots at the twins upon his wife's death.

Lothar with his mask off 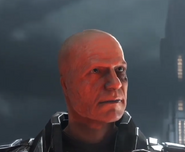 Lothar in his power suit. 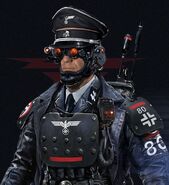 General Brandt in his field uniform as governor, prior to his fall from grace.

Concept art of General Brandt in his field uniform.