Return to Castle Wolfenstein
Enemy Territory
Wolfenstein (2009)|Wolfenstein
The Luger is a pistol used by the Imperial German Army and the Wehrmacht. It's named after its inventor, Georg J. Luger. It has great accuracy and ergonomics, but is costly to make. Because of its high cost, the Luger was officially replaced by the Walther P38 around 1942, but it never completely disappeared from German service until the end of World War II.

The Luger is favoured by many high-ranking officers in Wehrmacht and SS, as a symbol of authority. And along with Walther P38, the Luger is used to arm the rear echelon troops and units in occupied areas, before more MP 40 and Kar98K was produced, these troops are largely armed with pistols. It was also a prized trophy for many Allied soldiers. The Luger is one of the first successful automatic pistols in the world.

In SP, the Luger appears with you when you start the game. It has extremely good accuracy when fired still and from crouching, however this accuracy vanishes if the user is shooting while on the move. It uses the common 9mm round, causing 6 hit points of damage per shot. In fact, it can easily take down common Nazi guards if you stay still and find some good cover. You can even take out Black Guards with it if you have enough cover and/or distance between you and them. Headshots to enemies with helmets do double damage (12) and knock off the helmet. Otherwise, it is an instant kill (200 hit points of damage).

The Luger is ineffective against non-human enemies, Elite guards or human enemies at long range.

Later on, you can find a silencer for the Luger, which prevents enemies from being alerted to your presence, even if you miss. This makes it much easier to sneak around levels. The silenced Luger tends to miss the target more often than unsilenced, but not by much. The suppressed Luger is the quietest weapon in game, though the effect is the same with other silenced weapons in game. To maximize its effectiveness, using it in close is recommended. Some Elite Guards use slineced Lugers.

Luger made a brief appearance in 2009's Wolfenstein, like Colt M1911, it is owned by the Black Market arms dealer, and can be seen in Midtown West. It can also seen in the hands of some SS officers in cutscenes, and used by a German officer in the opening, but you cannot use them in game.

The Luger is the Axis' primary sidearm in Return to Castle Wolfenstein and Wolfenstein: Enemy Territory.

It also appears in Wolfenstein's multiplayer as a sidearm for both sides. 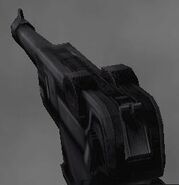 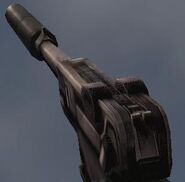 Luger placed on a table in Wolfenstein (2009)
Español Polski
Community content is available under CC-BY-SA unless otherwise noted.
Advertisement