This article is about the MG42 machine gun seen in Wolfenstein. For the version seen in Return to Castle Wolfenstein, see MG 42.

The MG42 (German: Maschinengewehr 42;English: Machine Gun 42) is a general-purpose machine gun seen throughout and is one of the most common mount weapon used in Wolfenstein.

Adopted by Germany in 1942, in an effort to reduce the machining time and cost inherent in the production of the MG34, the MG42 (MG standing for Maschinengewehr, literally "Machine Rifle") is perhaps the deadliest and the most widely used machine gun used during the Second World War. It was designed to take full advantage of modern production techniques such as replacing machined components with stamped ones; one of the key figures in the project, Ernst Grunow, had no prior experience in firearm design whatsoever and worked for Großfuß AG, a company that normally made sheet-metal lanterns. The result was a weapon that took 50% fewer man hours to build than the MG34 and cost 24% less. Light weight and great reliability made it one of the first true general purpose machine guns, able to be used in the light machine gun role on a bipod or the medium machine gun role on a tripod.

The light weight of operating components make the MG42 one of the fastest-firing single-barrel guns which does not require an external power source; with a cyclic rate of 1,200 rounds per minute, individual shots are mostly indiscernible. The distinctive sound led to nicknames such as "Hitler's buzzsaw." While this caused the weapon to heat up rapidly, the MG42 featured a very rapid barrel change system which allowed hot barrels to be easily changed out to keep up fire; however, this could not be practically operated with the weapon mounted on tanks, which largely retained the older MG34 as a result. The MG42 uses the same 7.92x57mm chambering (8mm Mauser) as the Kar98, though machine gun rounds tended to have heavier powder loads to make the weapon cycle more reliably.

In the game, the MG42 is an indestructible, non-equippable mounted weapon encountered in fixed locations with infinite ammunition, but governed by a heat gauge. MG42s are often found facing towards BJ's position, though sometimes an MG42 facing enemy positions can be found. They can be used by basic soldier enemies, friendly NPCs, and the player.

MG42s are found in key locations throughout the game, being present in both the missions and the Isenstadt hub maps. In the Uptown and Downtown area, it's advised to remember the MG42 locations and firing arcs, both because enemies spawning in the area are likely to use it against the player, and because the player can take control of an MG42 to easily cut down large swathes of enemies without expending any of their own ammo.

In the player's hands the MG42 is one of the most powerful weapons in the game, with roughly the per-bullet hitting power of a Kar98 and the same tendency to dismember enemies even without the use of Empower, combined with an extremely high rate of fire. The only shortcoming of the weapon is the heat gauge, which fills up rapidly and requires the weapon to be fired in short bursts.

In enemy hands the MG42 is almost as deadly, easily able to deal critical damage to BJ with a short burst. Mire turns the normal hitscan fire into projectiles and also slows the weapon's rate of fire, to the point it can be dodged without taking damage by moving across the line of fire. Shield can also be used to protect B.J. from MG42 fire for long enough either to take cover, or take a shot at the soldier manning the gun. Enemy AI has a very strong tendency to attempt to man any nearby available MG42, to the extent that a player with a scoped Kar98 or MP43 can easily clear a group of enemies just by sniping them in turn as they attempt to man the machine gun. Note that only basic enemies (Wehrmacht and SS) will man the MG42; mid-tier enemies like Scribes and Elite Guards will never even attempt to do so.

Friendly NPCs will sometimes also man an MG42; they are just as accurate as enemies with it, and if they use the weapon they can provide very useful covering fire to the player; though this can be somewhat unreliable, they can easily wipe out groups of enemy infantry when they fire upon them.

After the transition to the Downtown hub, MG42s will occasionally be found mounted on top of Portable shields. This combination is very dangerous, though unlike regular MG42s the shielded versions can be permanently destroyed if the Veil canister powering the generator is targeted and destroyed, which is easily accomplished using Empower to fire through the shield (a power that B.J. will have by this point in the game); this destructibility actually renders it a less persistent threat than the ordinary mounted MG42s.

Kreisau Circle agent with a MG42

Wehrmacht soldier with a MG42 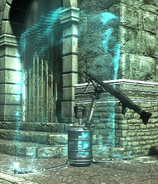 A Portable Shield with an MG42 mounted 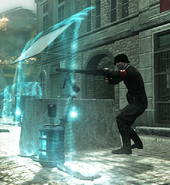