The MG-42 (Maschinengewehr 42 (lit: "Machine Gun 42") is a powerful mounted machine gun that appears in RtCW.

The MG 42 was first manufactured in the year 1942 by Mauser in Oberndorf, Germany with the aim of simplifying production of the technically sound but expensive and manpower-intensive MG-34. It was designed to be used as a general-purpose machine gun (GPMG) and could be mounted on a tripod with a belt feed or utilized in the light machine gun role with a bi-pod and a 50-round belt drum feed. It had several nicknames including Hitler's Zipper and Hitler's Buzzsaw, originating from the fearsome 1,200 RPM fire rate, fast enough that individual shots blended together to make a distinctive tearing or ripping sound. While this caused the weapon to heat up rapidly, the MG-42 featured a very rapid barrel change system which allowed hot barrels to be easily changed out to keep up fire; however, this could not be practically operated with the weapon mounted on tanks as coaxial machine gun, which largely retained the older MG34 as a result.

The MG-42 uses the same 7.92x57 mm. (8-mm. Mauser) chambering as both the Mauser rifle and the FG 42, though machine gun rounds tended to have heavier powder loads to make the weapon cycle more reliably.

The first one can be used by B.J. in Castle Wolfenstein during his escape from the Nazi soldiers. Several others can also be found on later levels. They are sometimes mounted on Halftracks. The enemy will not try to mount the MG 42. So once the gunner is killed, the gun is no danger after that. MG-42's can be destroyed by explosives or by sustained fire from any weapon, includes knife and boot. (except the Tesla gun and Flamethrower).

This MG-42 is found only in Return to Castle Wolfenstein. 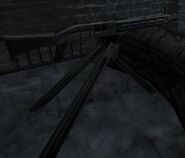 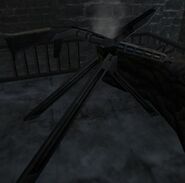 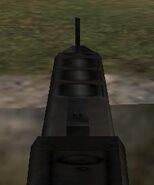