Edit
watch 02:59
Wiki Targeted (Games)
Do you like this video?
Play Sound

The MP43 (Maschinenpistole 1943 (lit:Submachine Gun 1943)) is an assault rifle available in Wolfenstein. The MP43 is comparable to the Venom gun, Thompson submachine gun, and the FG 42 rifle. It is the second most common weapon in the game.

The MP-43 was the earliest production version of the world's first mass-produced assault rifle. The MP-43 is the first version of the STG-44 (Sturmgewehr or Storm Rifle 1944) with some differences like a different stock pad, muzzle nut, shape of the front sight base or with a unstepped barrel, all only visible with close inspection. In game it uses more powerful rounds than the common MP40 submachine gun. It is less common than the MP40, but in the later parts of the game, it tends to be used enough to be a reliable weapon.

The first MP43 in the game is found in the hands of a soldier guarding the Thule Portal near the end of the mission Dig Site. It is possible to miss this pickup, as while he usually drops it right in the doorway to the portal, if he has taken cover it will be off to one side. Further MP43s can be found fairly regularly in the hands of SS soldiers and officers.

MP43 ammo is dropped by SS officers or found in boxes very similar in appearance to those containing ammunition for the MP 40. Ammunition is at first scarce when first discovered, but becomes gradually more common as the campaign progresses and the player faces greater numbers of elite SS soldiers, you will find that ammo for the MP43 becomes almost as abundant as its predecessor. Due to the MP43's higher damage input, you can use the MP43 if you don't have time to pull out your Kar 98k, especially with the Scope attachment.

Almost all boss arenas include an endlessly respawning source of MP43 ammo. This is not deactivated when the boss dies, allowing the player to completely replenish their stock if they are patient. An example is in Hospital mission, where a lot of SS soldiers will appear during Boss fight. This applies even to Viktor Zetta's boss arena, which appears to explode after he is defeated; the explosions are purely for show, and deal no damage to the player.

Like its predecessor, the MP40, the MP43 is an excellent weapon to use for most combat scenarios. It has a higher rate of fire and inflicts significantly higher damage (12.5 points) than its predecessor, but the recoil is comparatively higher, and therefore less accurate without upgrades. Early in the game ammunition is in short supply, but later as the MP43 starts to be carried by larger numbers of enemies it can practically replace the MP40 as the player's primary weapon. While it is the most expensive weapon in the game to fully upgrade (and also has the most expensive single upgrade, the tactical scope), when fully upgraded and paired with Empower it is able to take down foes at anything but extreme ranges. Big Bore lets it do 19.1 points of damage. With Empower, the MP43 is capable of killing mid-level enemies like Scribes or Elite Guards very quickly, or killing a large number of weaker enemies rapidly. In general, both the MP40 and the MP43 are virtually identical in terms of range, accuracy, and their purpose in combat. 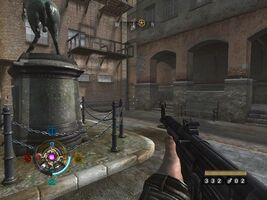 MP43 without any upgrades. 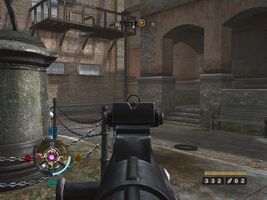 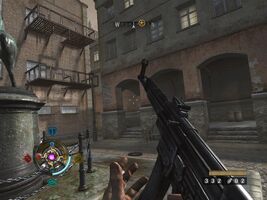 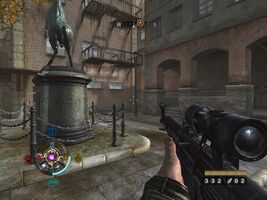 MP43 Equipped with a scope. 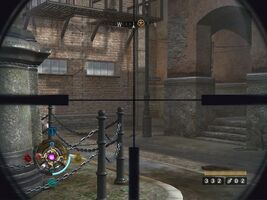 Looking through the MP43's scope.
Community content is available under CC-BY-SA unless otherwise noted.
Advertisement