Wolfenstein Wiki
Register
Don't have an account?
Sign In
Advertisement
in: Weapons, The New Colossus weapons, Stub,
and 4 more

Light Rounds (Both TNC and YB, 9x19mm Parabellum and nail gun upgrade of it)

"A standard-issue sub-machine gun used by the regular Nazi soldier. It's high fire rate makes it useful for taking on multiple enemies at close range."
―Description of the Maschinepistole.[src]

The Maschinenpistole (MP61; lit."Submachinegun of 1961"), later the Blitzgewehr (lit. "Lightning Rifle"), is an automatic firearm issued to Nazi soldiers in Wolfenstein II: The New Colossus and Wolfenstein: Youngblood. Like the SMG featured in The New Order, it is the first weapon used by the player.

A standard-issue gun used by the regular Nazi soldier and a replacement for the standard 1960 Assault Rifle for regular soldier. Its high fire-rate makes it useful for taking multiple enemies at close range. This weapon's functionality and role is very similar to the American SMG used in The New Order.

"Take this. They're looking for you."
―A resistance member giving B.J. one of his Maschinenpistole's at the beginning of The New Colossus.[src]

The Maschinepistole is the first weapon B.J. acquires in The New Colossus, given to him by a resistance fighter during Irene Engel's attack on the Eva's Hammer. After he and Fergus/Wyatt are saved by Sigrun Engel on the Ausmerzer, he re-collects the weapon, and now can duel-wield them.

In Area 52, B.J. takes one from a Nazi soldier and escapes on said soldier's Monocycle to Mesquite, Texas. B.J. later acquires the weapon in the Courthouse section in his hallucination or dream, taking it from a soldier and knocking him and the bailiff out.

In Wolfenstein: Youngblood, the Blitzgewehr is common weapon for soldiers, and isn't a weapon the twins have in their starting inventory. The first Blitzgewehr can be collected from the first Nazi soldier the player can stealth kill in the first mission.

The Smith & Wesson M76 sub-machine gun, which the Machinepistole's design is mostly based on.

The full schematic of the Maschinenpistole.

A modified Maschinenpistole in BJ's left hand, and a Sturmgewehr on his right.

B.J. being given the weapon.

9mm ammo used by the Maschinepistole.

The Maschinenpistole in action.

B.J. leaning with the Maschinenpistole.

BJ with the Maschinenpistole, stealing it from the soldier. 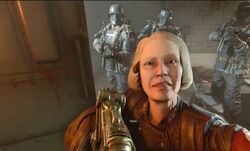 Joe looking at the drum magazine upgrade in The Adventures of Gunslinger Joe.

Gerald looking at the suppressor upgrade in The Amazing Deeds of Captain Wilkins.

The Maschinenpistole in The Freedom Chronicles.

Blitzgewehr with red dot scope in the Youngblood.

One of the twins wielding a Blitzgewehr. 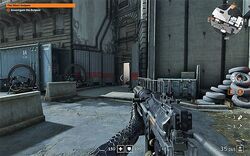 A Nazi wielding a Blitzgewehr against one of the Jess after the moment of Sophia blow his head.

with all of the tempo sets