The Maschinenpistole is a submachine gun that appears in Wolfenstein: Cyberpilot and Wolfenstein: Youngblood.

The Machinenpistole appears in Wolfenstein: Cyberpilot as the only firearm-related weapon used in the game, at the very end, when the VR Cockpit section of the research facility was destroyed by the Nazis in a spiteful retaliatory attack, due to the Cyberpilot hacking their robots, with no Vehicles for him to control, he was thus forced to use the Machinenpistoles found on the desk in front of him to fend off the remaining Nazis. For reasons that ought to be obvious, The Maachinenpistole has infinite ammo.

The Maschinenpistole is often a weapon wielded by some higher tier Commanders, and be found laying around areas they usually are (e.g. their small stations). The player can choose between the Maschinepistole or the Pistole as their starting sidearm before starting the game, and will be upgraded by default if chosen. Lothar Brandt wield the weapon in their boss fights, dual-wielding and upgraded.

One of the twin uses the twin uzis to shoot at the Zitadelle (right corner).

One of the twins dual-wielding.

One of the twins dual-wielding upgrade Maschinenpistole's. Notice the bullets due to rapid firing.

One of the twins turning the Maschinenpistole on a Commander. 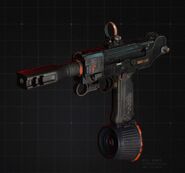