This article is about the long-ranged rifle in Return to Castle Wolfenstein. For the scoped version of this weapon see sniper scope. For the version seen in the 2009 game Wolfenstein, see Kar98.

The Mauser rifle is a powerful long-range rifle in Return to Castle Wolfenstein which is able to mount a scope.

The weapon is based on Karabiner 98 Kurz, the most common weapon issued to German soldiers during the Second World War. It has a short timeout after each shot during which a sound like operating a bolt can be heard, which gives it a slow rate of fire. However, it is both powerful and accurate, and once the scope add-on is picked up it is a very capable sniper rifle. In the enemy hands, this is a deadly long-range rifle, even though most of them are not scoped. 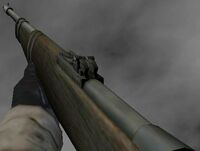 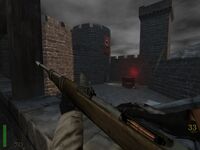