Wolfenstein Wiki
Register
Don't have an account?
Sign In
Advertisement
in: Nazis, Wolfenstein II: The New Colossus, Death,
and 10 more

During the war Rademaker became known for being responsible for the destruction of the Gondor bridge in 1946. In 1952 he along with Daniel Eckstein commanded the offensive that ended resistance to Nazi occupation in Tennessee.

By July-August 1961 Rademaker, under the command of Irene Engel, had become one of the Übercommanders, the most influential senior officers in the American Territories.

Rademaker was sent to the Venus Transporthalle in order to oversee the delivery of construction materials for the mining operations at the base, staying in a sealed control room. Despite this, B.J. successfully assassinated him as part of the effort to eliminate the Nazi leadership in America.

In the Freedom Chronicles[]

Rademaker does not appear as a character in Curtis Everton's books. In The Adventures of Gunslinger Joe it is noted that in 1959 he worked with Roderick Metze to organise a bombing campaign that flushed out the resistance in Springfield, allowing the capture of sixteen fighters, some of whom were taken to Research Station Omega. However as the events of the story and the character of Metze only exist as works of fiction within the Wolfenstein setting, it is unlikely that these events occurred as described, if at all. 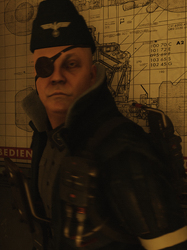