K.I.A. (Shot in the head by Irene Engel)

"It was space aliens, man!"
―Super Spesh before his death.[src]

Norman "Super Spesh" Caldwell was a member of the American Resistance, as well as a former lawyer and avid conspiracy theorist believing in alien lifeforms. In the past, he defended Grace Walker successfully in the trial where she was accused of murdering an FBI agent while she was a member of the Black Revolutionary Front. And also while living in his hometown of Roswell, in 1947 he and his father discovered the remains of what he believed was alien effectively creating his strong belief in alien existence.

Prior the occupation of the US by the Nazis, he quit his job as a lawyer to work with his father to uncover US government cover-ups about aliens and their technology, although in truth the supposed alien technologies were actually Da'at Yichud technologies. During this time, he inherited a diner from father as front for his operations, with a secret control base and tunnel to Area 51 hidden below.

After the occupation, he joins the American Resistance to fight against the Nazis, using his secret base under his diner as mission control.

Shortly after BJ is captured by the Nazis. He arrives at his cell under the guise of being BJ's lawyer. After trying to trick the guard, Zimmermann outside the room that BJ escaped so he can kill him. But before he could enact his escape plan, he is killed by Irene Engel who shot him in the head, and then shot him in the back. Grace Walker mourns his death. BJ later successfully avenges his death, by killing Engel.

During B.J.'s assassination of Jürgen Schlusser, he found a letter from Super Spesh's detailing that he had prepared for his death for a long time and he loved Grace when she was arrested on the false charge of murder as well as the fact about Grace's disbelief in the concept of nuclear family. Furthermore, he is in fact Abby's biological father.

His spirit lives on through his daughter as Abby becomes a natural rebel as she grows up much to Grace's dismay.

Super Spesh is an avid conspiracy theorist who obsesses over uncovering alien technologies and lifeforms hid by the US government. His obsession is so strong that he refuses to believe any of the US technologies from Area 51, 48, 56 and 52 were man-made.

Socially, Norman is energetic, loud, and sightly obnoxious, frequently ranting about space aliens and conspiracy theories to B.J., who was clearly uninterested by their conversations. Despite usually taking his work seriously, Norman does have a sense of humor, shown when he interrogates B.J. at gunpoint out of suspicion of him being an alien, only to reveal he was joking and humorously refers to him as "Terror-Billy".

Spesh is shown to have a deep hatred for the pre-occupation US government, including the FBI and military for their alleged corruption and for submitting to the Nazis, whom he hate even more, often referring them all as 'pigs'. Ultimately, his underestimation of the Nazis deceit and abuse of power leads to his downfall. 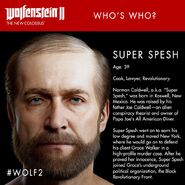 Super Spesh admires the toilet of the Eva's Hammer after years of living in squalor in the irradiated Manhattan.

Super Spesh after enjoying himself in the toilet of the Eva's Hammer.

Super Spesh points his pistol toward B.J. to joke at him.

Super Spesh after being killed by Irene Engel.

Speshie's corpse in the background.

Grace mourning Super Spesh's death, having a picture of him.

Grace stumps upon the toilet Super Spesh enjoyed so much before his demise during B.J. 50th birthday showing that there is still part of him to celebrate B.J. birthday.

Super Spesh and Grace Walker several years ago before the occupation.

The memorial for Super Spesh and Caroline Becker.
Add a photo to this gallery

Retrieved from "https://wolfenstein.fandom.com/wiki/Norman_Caldwell?oldid=63787"
Community content is available under CC-BY-SA unless otherwise noted.