Wolfenstein Wiki
Register
Don't have an account?
Sign In
Advertisement
in: Wolfenstein II: The New Colossus, Nazis, Enemies,
and 5 more

The Oberkommando or Oberkommando der Wehrmacht (OKW, "High Command of the Armed Forces") is the Nazi High Command in charge of the entire German war effort through World War II and their subsequent global military operations. In the real world, it is led by Generalfeldmarshall Wilhelm Keitel as the leader of the OKW and generaloberst Alfred Jodl as the chief of operations staff.

Officially, the OKW served as the military general staff for the Third Reich, coordinating the efforts and in complete authority of the Army, Navy, and Air Force (Heer, Kriegsmarine, and Luftwaffe). In practice, the OKW acted as Hitler's personal military staff, translating his ideas into military orders, and issuing them to the three services while having little control over them

The Oberkommando was originally based in the German Capital of Berlin. However, after the destruction of Deathshead's Compound in the Baltic Sea in November of 1960, they determined that Europe was unsafe due to the Kreisau Circle's insurrectionist activities. To compensate for the severe slowdown in advanced scientific research and to find more stable territory, the Oberkommando left Berlin and relocated to Area 52 outside of Roswell, New Mexico in the occupied United States. This was the location of a massive Da'at Yichud safe keep specialized in anti-gravity technology and instrumental to the Nazi's post-war space program. The Nazis capitalized on rail, computer, and aviation infrastructure already established by the U.S. Military in a futile attempt to match Germany's technological prowess.

By 1961, America's underground Black Revolutionary Front had been informed by member Super Spesh that the Nazis had relocated the Oberkommando to his hometown of Roswell. Seeking to prevent the Nazis from further developing new technology and to eliminate their leadership, the BRF and Kreisau Circle jointly dispatched B.J. Blazkowicz to Roswell with a portable nuclear warhead for a saboteur mission against the Oberkommando. Blazkowicz successfully infiltrated Roswell, rendezvoused with Spesh, entered the rail links leading to Area 52, and deposited the nuclear warhead inside the facility's nuclear reactor.

Unfortunately, the Nazis managed to learn of Blazkowicz's efforts and initiated an immediate evacuation of Area 52. Blazkowicz summilarly exfiltrated using a monocycle and detonated the bomb, utterly destroying Area 52. While the leadership of the Oberkommando managed to leave, many personnel at the facility were killed, the equipment onsite was vaporized, the Hauenbe-V manufacturing and resupply station was demolished as well as the fact the German command in the U.S. was destabilized.

After the destruction of Area 52, the Oberkommando relocated a second time to the newly established colony on Venus. At the same time, the Nazis moved their critical equipment command codes from their recently compromised Lunar Base to Venus as well. Finally, the German supreme leader Adolf Hitler made the less than conscious decision to relocate himself to Venus to personally oversee the new Oberkommando, ensure his safety from potential terrorists and spies, to live the golden years of his life in the luxury of the Venusian Atmosphere, and to direct a movie celebrating the supposed death of B.J. Blazkowicz.

Unfortunately for Hitler (or more a strange sense of justice for his victims), his deteriorating mental health brought upon by Parkinson's disease burdened him with crippling paranoia even within his over-defended Oberkommando, twenty million miles from any human threat. Of course his misplaced paranoia would be proven correct as the still very much alive B.J. Blazkowicz managed to infiltrate the Oberkommando killing nearly all personnel and stealing the codes to the Ausmerzer's ODIN defense system, enabling the BRF and the KC to invade and hijack the Ausmerzer, effectively setting an expiration date on the German occupation of America and the world. It is unknown whether B.J. did manage to kill all the key members of the Oberkommando during his Venus infiltration or not since he didn't kill Hitler after escaping the base.

During B.J. assassination of Ubercommanders, he infiltrates the Venus base three times to kill three Ubercommanders: Thomas Wechsler, Ludwig Kassmeyer and Michael Rademaker. Ubercommander Fredrich Baumgarter tries to salvage what remains of the old Oberkommando base in Roswell but got himself and his men killed by B.J. making the Nazi unable to get back their lost resources.

Furthermore, a Resistance Gunslinger Joe also manages to cause a lot ruckus by rampaging through the base to successfully kill Roderick Metze.

Concept art of the nuclear reactor in the Oberkommando HQ in Roswell, Area 52. 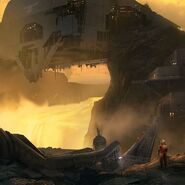 Concept art of Venus Oberkommando base.

A part of Venus Overkommando base.

One of the interior part of the Venus Oberkommando base.

The Aerostat Habitat in Venus, which is also Hitler's office.

B.J. extracts the override code of the Ausmerzer in the Oberkommando computer.

The prison quarter in the Oberkommando.

The Garage of the Venus Oberkommando base.

Transportation pod used by the Nazi to transport personnel from the Aesteral Habitat to the Oberkommando.
Community content is available under CC-BY-SA unless otherwise noted.
Advertisement