Return to Castle Wolfenstein
Officers (German: Offiziere) are usually seen leading their soldiers against Blazkowicz and are often remarkably accurate with their weapons. During his exploits, Blazkowicz often has to terminate important officers in order to disrupt the chain of command.

The Officer will always carry a Luger, except for "The Dig" mission, where most of them use the MP 40, despite their inferior weaponry, their accuracy somewhat makes up for this, and so they should be taken seriously. Officers are sometimes B.J.'s target. There are two varieties, Wehrmacht officers and SS officers. They both have the same characteristics, however, the SS are more accurate than the standard officers. They can be distinguished by their different uniforms.

In mission 6 of second part, most of them need to be eliminated to complete the objectives, otherwise you can't proceed to the next level. It is worth noting that their uniforms in the game have mismatching insignia and apparel; For example, Wehrmacht officers in the game wear SS officer's visor cap with the skull badge, while some even wear red SS armbands. This is likely due to the developers not doing proper research on German uniforms. 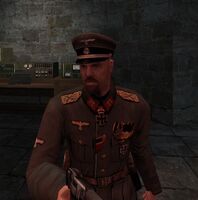