For the appearance in Wolfenstein RPG, see Olaric (RPG).

Olaric was a leading figure in Thulian lore and the creator of the Dagger of Warding which was believed to possess mystical powers. He was buried in a tomb next to a church in the village of Wulfburg and the dagger was placed on a pedestal in his mausoleum. During Return to Castle Wolfenstein, Olaric became a living undead colossus of flesh, known as a Flesh Golem. He is the first boss of the game.

In 1943, Helga Von Bulow of the SS Paranormal Division sought out the Dagger, believing it could help win the war for Nazi Germany. Her colleague, Professor Zemph, warned her that taking the Dagger could break the inner seal and possibly release either more zombies.... or something worse. Irritated, Helga killed Zemph with her Luger and took the Dagger only to revive Olaric as a large hideous monstrosity who quickly dismembered her. The beast was covered with the faces of tormented souls.[1]

Before he could do any more harm, Olaric was confronted by O. S. A. Agent Blazkowicz. Despite using the powers of the undead, Olaric was destroyed by Blazkowicz who then proceeded to take his Dagger for study.

Olaric Chasing B.J. during a Confrontation. 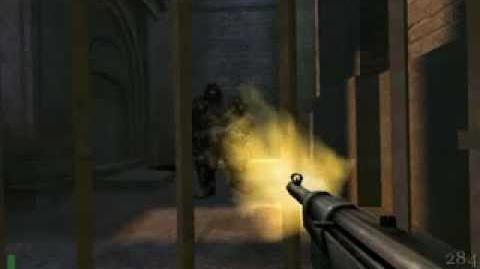 Return to castle Wolfenstein boss 1 Olaric the blacksmith
Boss fight against the Olaric.
Add a photo to this gallery
Retrieved from "https://wolfenstein.fandom.com/wiki/Olaric?oldid=63060"
Community content is available under CC-BY-SA unless otherwise noted.