Wolfenstein Wiki
Register
Don't have an account?
Sign In
Advertisement
in: The New Order enemies, Robots, Wolfenstein enemies,
and 10 more

Edit
watch 01:13
What is a Panzerhund?
Do you like this video?
Play Sound

The Panzerhund was one of the first prototype robots to come out of General Deathshead's workshop. According to a newspaper article found in-game, it was first deployed on the Eastern Front, creating chaos along the Russian ranks as it tore through the battlefield.

Initially despite the introduction of the Panzerhund, the most common German canine unit to be seen on the battlefield in the Western theaters during the late 40s was the Kampfhund; the Panzerhunde encountered in 1946 by B.J. Blazkowicz appeared during the crash landing upon the beaches of Deathshead's Compound, before he and the other remaining Allied troops scaled the castle walls. Despite their appearance and apparent invulnerability to most attacks, they are taken out by B.J. using an anti-aircraft gun. Upon exiting the bunkers surrounding Deathshead's castle, B.J. is attacked and nearly killed by a Panzerhund, but is saved when Private Probst Wyatt III tricks the beast into catching a live grenade in its mouth, destroying it.

However this was actually not the first time Blazkowicz had personally encountered a Panzerhund. During the events of the Old Blood, B.J. had twice encountered a prototype of the Panzerhund. It is first encountered after B.J. sees Rudi Jäger take Wesley to be interrogated. It walks out of two sliding doors and B.J. must hide from it to avoid being killed. The same one that is encountered that time is seen again trying to jump up and kill B.J. very similar to how another one did in the New Order. It is seen again during a shootout at Paderborn Bridge, and B.J. must kill it to advance.

Alongside Deathshead, a key figure in the creation of the Panzerhund was a certain Dr. Ernst Brandt who designed the Artificial Intelligence system used in the robot.

The Panzerhund 1960 is the evolution of the first prototypes and production model created by General Deathshead during the war. As envisioned by the General in one of his fevered visionary dreams, it is a super-efficient murder machine encased in titanium steel armor and fitted with bone-crushing metal jaws that can cut through the thickest of body armor.

The new, far more deadly Panzerhund can be seen several times during the campaign, each time posing a lethal threat to the player. A 1960s Panzerhund requires far more firepower to bring it down than its 1940s counterpart.

B.J. first encounters the 1960 Panzerhund while infiltrating the Eisenwald Prison in Berlin. it chases you through pipes but later while escaping you will eventually incapacitate it in electrified water if B.J. chose to save Fergus, or run past it while it's distracted if B.J. chose to save Wyatt. Following Bobby Bram's suicide bombing of the London Nautica, B.J. evades and kills another Panzerhund as he makes his way into the building. Later, B.J. fights and destroys two more Panzerhunde while escaping the raid on the Kreisau Circle's hideout.

The Panzerhund makes a comeback in Wolfenstein 2: The New Colossus, this time in the 1961 Nazi-occupied United States. This model features an upgraded body and has a flamethrower in its mouth, and having more protective armor. A Panzerhund appears as the titular deuteragonist of the in-game film Liesel. The main character Peggy summons Liesel with a whistle and orders her to save a sheriff from his overturned truck. Liesel does so, but also destroys the truck, to Peggy's disappointment.

While searching for Horton in the ruins of New Orleans, B.J. encounters Panzerhunde patrolling the streets as part of the citywide purge.

At some point, Horton's resistance cell captured and reprogrammed a Panzerhund to fight its former masters. B.J. himself rides the Panzerhund, killing as many Nazis as possible, in order to buy Horton and other survivors of the New Orleans ghetto time to escape.

Also Joseph Stallion had managed to steal a Panzerhund during his escape from a prison in Chicago in his adventures. In his second volume, a Panzerhund and Super Soldier appear, but can be avoided if the player jumps on top of the containers. One Panzerhund appears in Jessica Valiant's story on the Moon to assassinate Gerhardt Dunkel.

Panzerhund returns in Wolfenstein: Youngblood. It appears to function much the same way as their counterparts in America during the 1960s; this time they are deployed to patrol the whole country of France to crush the rebellion where ever it can be found. They also are painted a deeper shade of black and marked with red instead of yellow.

In New Paris, there is a Panzerhund assembly plant in the underground zone of Victory Boulevard. The Blazkowicz sisters destroy the assembly console of said assembly plant, effectively halting the production of the Panzerhund in that region. During the mission, they also have an encounter with a new, experimental model of the Panzerhund, called the Protohund, painted red rather than black. The model's exceptional characteristic that stands out from the ordinary Panzerhund is that their sides, and fuel tanks, are armored. Thanks to that reinforcement, the Protohund can no longer be downed or damaged by shooting its sides. Nonetheless, the Protohund is still destroyed by the Terror Twins. 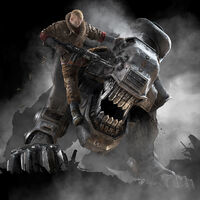 Panzerhund during its routine ethnic cleansing in New Orleans.

A Panzerhund firing it flamethrower at B.J.

Panzerhund prepare to fire it flamethrower from the side.

1961 version of Panzerhund with a built-in flamethrower.

Joe on top of the Panzerhund.

Agent Silent Death battling the Panzerhund on the Moon Base.

A Panzerhund attacking the Terror Twins in Youngblood.

The twins looking at the Panzerhund statue. 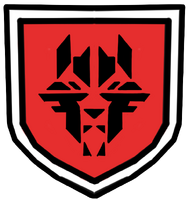 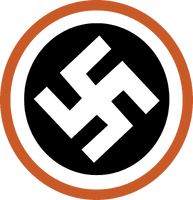 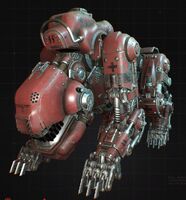 Protohund destroyed by one of the twins in Victory Boulevard.