After being kicked into a prison cell by Rudi Jager, B.J attempted to get out of his cell by climbing on a pipe. However, this pipe broke as he attempted to climb it, and fell besides him on the prison floor. B.J realized he could use the pipe to scale walls, open locked doors/hatches, disable super soldiers, and kill enemies.

The Pipe is stronger than the knife since it can deal significant damage in direct combat. The Pipe is also the only melee weapon that can kill Shamblers, as the Knife cannot kill Shamblers.

A promotion art of The Old Blood with BJ fights a Nazi soldier with a pipe.

B.J. pipes a Nazi commander in the neck.

B.J. impales a Nazi commander with a whole pipe.

BJ pipe stabbing a Nazi soldier in the chest 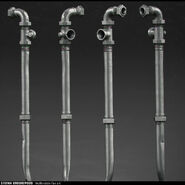 Concept art of the pipe.

The Pipe in Youngblood.