Project Nachtsonne (aka Operation Nachtsonne) was a Nazi Germany special operation run by the SS Paranormal Division in Wolfenstein, searching for new ways to win the war against the Allies during WWII.

Following the failure of the Operation Resurrection in early 1943, which was foiled by the american spy B.J. Blazkowicz, the SS Paranormal Division have located a mysterious ancient power somewhere within Germany, a gateway to a dimension that was first discovered during the time of the old Thule civilization. As more and more members joined the project, the process was successful as they are able to create a copy of the Thule Medallion and hand it the General. which will lead the SS Tirpitz in the Atlantic Ocean to full front assault against the United Kingdom. However, the plan was averted by Blazkowicz again and he escaped along with the Thule Medallion before the Ship self-destructed.

The primary site of the project is in the city of Isenstadt, as it is the only place where Nachtsonne crystals can be found and harvested. A large force of Wehrmacht and SS troops was deployed within the city, as well as elite forces such as the Scribe, Heavy Trooper, Elite Guard, Veil Assassin, and Drache Trooper.

The project created a number of inhuman monstrosities, such as the Sniffer and the Altered after humans are transformed into Inhuman like beasts. Only Despoiled and Sniffer are able to be controlled by the Scribe and Elite Guard. They continued studying and experimenting, they manage to create a device that draws out even more energy through the Dimension as seen in the Church and Castle mission that created another kind of monster like the Despoiled and drawing out Gigantic Monster Queen Geist, once the Device failed.

The Operation failed as B.J. Blazkowicz used his Nachtsonne crystals to destroy Hans Grosse's Thule Medallion that was connected to the Thulian Machine inside the Black Sun Dimension, causing a chain-reaction that annihilated all of the Nazis' veil-related equipment, including their zeppelin.

Veil Heavy Trooper is the First Successful Test Subject to be deployed on the Battlefield all over the Isenstadt.

Sniffer, One of failed Test Subject. Now It served as Scribe Pets to find more Black Energy through out all over Town. 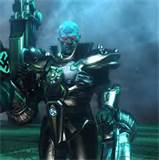 Hans Grosse is possibility the final stage of the Project Nachtsonne readying to used the Final Weapon with his own Armor Suit connected to the Black Sun Energy to fire out from the Zeppelin through the Dimension.
Add a photo to this gallery
Retrieved from "https://wolfenstein.fandom.com/wiki/Project_Nachtsonne?oldid=50034"
Community content is available under CC-BY-SA unless otherwise noted.